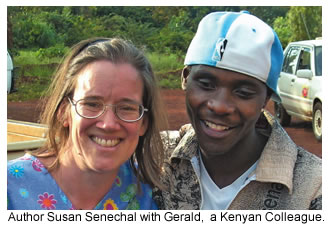 Stepping off the plane at the start of our African mission trip, I had visions of taking a side excursion, a genuine safari. After all, we had a free day to get acclimated, and my friend, who had taken this trip six months earlier, had used her free day to go on a safari.

But disappointment was my lot. I was told our group wouldn’t be going to the nearby reserve this time. Somehow, I felt cheated out of part of my experience. “Who goes to Kenya without going on safari?” I wondered.

In our worship service that night, I learned that the Swahili word safari actually means “journey,” not “animal hunt” as I had always supposed. That night, unable to sleep, I felt as though God spoke gently into my heart. “Susan,” He seemed to say, “this isn’t about seeing animals in Africa; this is a safari to see Me, to journey beside Me.”

The next morning I arose with renewed enthusiasm for the journey, for God’s safari. What an adventure I was about to have!

We arrived at the site where we would set up our eye-care clinic, a church in a rural area about two hours from Nairobi. It was midway through their Sunday-morning worship service. An elder quickly ushered us to the front of the church, and thepastor began his sermon in English, making us feel welcome, while another gentleman translated for the worshipers. When it was time for Communion, I felt a special thrill, knowing that Jesus’ body and blood unites believers in Kenya to those halfway around the globe in my home, Houston, Texas, who would celebrate in the same way in a few hours. We truly are one in Christ.

An even bigger thrill awaited me as the offering began and the words of 2 Cor. 9:7 came alive. “Each man should give what he has decided in his heart to give, not reluctantly or under compulsion, for God loves a cheerful giver” (NIV). As the music began (the beat of a drum and a cappella voices), the worshipers began to “dance” their offerings to the front of the church. Swaying, spinning, bowing, dancing exuberant joy—these were cheerful givers!

While most placed money in the basket, one family brought forward two live chickens, two others brought bags of produce, and one family gave a stack of five plastic Wal-Mart-style chairs. (These were quickly put to use in our clinic the following week.) While I was wondering if the chickens were going to fly the coop, or in this case, the offering plate, the pastor made a point of saying that each of these families was acknowledging that everything we have is a gift from God.

My mind could not get past the joy of the dance. I have never danced when placing my offering in the plate on Sunday, and what’s more, I’ve never even had that attitude. Yes, I willingly give my tithe, not begrudgingly, but I’ve never given it with the thrill I saw among these people of such modest means.

I have no idea how many coins were placed in the offering basket that day, but I know that what God received was far more valuable than coins—He received heartfelt worship from people who understood that not just what they had was a gift from God, but who they are is God’s gift as well—people who know salvation in Jesus Christ.

My safari with God that week was just beginning.