One of my favorite authors is F. W. Boreham (1871–1959). Boreham was a Baptist pastor of churches in New Zealand, Tasmania, and Australia. He wrote thousands of articles and scores of books. During his lifetime, his writing was popular in many Christian circles. Today, he is almost unknown. Fortunately, some of his books are currently being reprinted.

Boreham had the gift of observing everyday things and using them to teach Christian life lessons. I am no Boreham, but I would like to share some circumstances that have had an impact on me.

About a year ago, my wife, Holly, and I acquired a short-haired, mostly black cat from the local humane society. The cat’s name is Sherman, the name which the humane society had given him. He quickly became an important member of the Genzen household. Sherman is extremely friendly and affectionate. Like all cats, he reserves the right to be alone at times. Generally, however, wherever people are in our house, there you will find him. He brings us much joy on a daily basis. He asks for little in return. 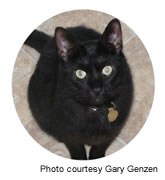 Sherman is a cat, not a human. However, as I have watched him during this past year, he has taught me much. It has been said that, in the wild, for every time you see a cat, such as a lion or a tiger, the cat observes you 200 times. Sherman has taught me that this may be true. Even when he appears uninvolved with his surroundings, his eyes, and indeed all his senses, seem exceedingly attentive. He seems aware of everything that is going on around him. He is vigilant. At the same time, Sherman is also relaxed. He will respond to a perceived threat, but he appears generally untroubled by the events of everyday life.

This is a reminder for us. As Christians, we have a responsibility to be aware of events in the world around us. We need to stay vigilant to the threats of the world, Satan, and our sinful flesh. We also need to be vigilant concerning threats to our physical and spiritual well-being. At the same time, God does not call us to a perpetual state of anxiety. Rather, His will is that we be rested and relaxed in Him.

Sherman also demonstrates complete trust in Holly, me, and virtually anyone else who comes through the door. He knows that we will care for his needs. He responds by providing companionship, playfulness, and affection. We can emulate Sherman by having the same kind of trust in our triune God and in our Savior, Jesus Christ. God provides us with the blessings of all that we need, and far beyond. We respond with praise and thanks and by trusting and loving God in return.

I will close with this observation. Sherman wakes up each morning at about 5:15. Holly and I think he must have a built-in alarm clock. He also believes that everyone else in the house should wake up when he does. In any event, he awakens with what appears to be a real sense of enthusiasm for the day ahead. When night comes, Sherman sleeps, either at the foot of our bed or on a sofa in our study. He greets the day with a sense of energy. He sleeps at peace at night, apparently not worried a bit about tomorrow. His waking and sleeping remind me of the concluding statements in Luther’s Morning Prayer and Evening Prayer. Beginning the day, Luther says “go joyfully to your work.” Ending each day, Luther says “go to sleep at once and in good cheer.” Sherman the cat appears to do both.

It’s amazing what a cat can teach you. Indeed, by drawing some parallels, we can even learn something about the Christian life.