On Aug. 7, 1999, a storm brought 12 inches of rain to Omaha, Neb. A debris-filled creek overflowed near my parents’ home, causing a deep whirlpool to form around the house. My father went to the basement to check on water seepage. He was killed when the basement walls crashed in and the raging water washed him away. Meanwhile, rescue teams tried desperately to reach my mother, who was on the porch. A fireman rescued her just as the porch collapsed.

Saved from death number one. 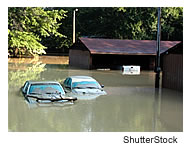 Dec. 17, 2001, was a frigid, snowy Nebraska day. My mother’s ground-level apartment faced the garage at the back of her complex. On a mid-afternoon cigarette break, she stepped outside, fell, and broke her hip. Eventually, two young men who normally were not at home during the day heard her cries and called for help.

The surgeons were reluctant to operate. Mom might not survive. The other option: Keep her bedridden until the break healed. This could be a long time. We opted for surgery.

Although Catholic, my mother had not been involved with the church for many years. On the day of the surgery, there were no clergy available. So my youngest daughter and I offered prayers. God heard them, and Mom survived. We moved her to a care facility on Christmas Eve and celebrated a blessed Christmas Day with her there.

Complications. My mother was rushed to the hospital. My oldest daughter arrived the same time I did. We found Mom in good spirits. We held hands, said the Lord’s Prayer, and wished her good night.

My home was 25 miles away. As I arrived, the phone was ringing. Mom had gone into cardiac arrest.

Back in the car. The roads were icy. It seemed I would never arrive. When I walked into her room, the nurses were still trying to get her heart started. Mom had been placed on a ventilator. She had been without oxygen for too long, and the hospital staff did not believe she would breathe on her own. A decision had to be made. Her living will made it clear what her wishes were. The decision was how long to wait.

I called our interim pastor. As I collapsed into his arms, I told him what I feared: that over the years my mother had slipped away from God. I wanted her to hear God’s Word one more time. We prayed and left it up to God. The hospital called the priest on duty. Mom was given the last rites. The ventilator was disconnected.

Unexpectedly, Mom breathed on her own. Although unconscious, she was doing well enough that my husband encouraged me to go home and get some sleep. Reluctantly, I consented.

In the middle of the night, my mother awoke and asked for me. My husband witnessed to her, prayed with her, and read God’s Word to her. It was the gift I had prayed for.

After a while, Mom slipped back into unconsciousness. The next morning, my husband called. “Take your time. Things look good,” he said.

Less than 15 minutes later I received another call. Mom was slipping away. Please hurry.

By God’s grace I arrived in time. I lay next to her, and God gave me the privilege of holding her as her life on this earth ended. We buried her on New Year’s Eve 2001, just 15 days after her fall.

And she was able to hear God’s Word one more time.