In early December 2007, I fell down my (thankfully carpeted) stairs, spraining my right foot and ankle severely. My Advent gifts included crutches and an orthopedic boot; these accoutrements, in addition to multiple ice packs, would become my best friends over the next six weeks. They certainly made it a Christmas to remember. 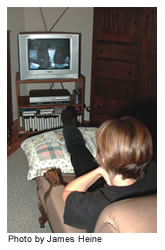 Thankfully, I had set up the Christmas tree the day after Thanksgiving. And even though I couldn’t drive for the next six weeks, I knew the remainder of my Christmas shopping could be completed via Internet.

On the other hand, daily chores were a challenge. The simple task of unloading the dishwasher became an exhausting project. No more pirouetting from dishwasher to cabinet, tossing the plates into their places like Frisbees. I would roll my desk chair into the kitchen, stack the dishes carefully on the counter, then balance gingerly on my good leg and place them, one by one, on the shelves.

It was then I noticed the dings and chips on almost every dish, a result of my usual practice.

I began to notice the dings and chips in my relationships, too. How many times had I rushed my kids along so I could move on to something else? My bum leg forced me to sit still and really listen to their concerns and answer their questions.

How many times had I excused myself from (I thought) a tiresome conversation with my husband? Now I hung with it (and with him) because it was too much effort to grab my crutches and hobble away.

I could sense that God again was doing something awesome amidst adversity. Yet with Christmas and all its activities, expectations, and obligations approaching, I was uneasy. Shouldn’t I be baking seven dozen cookies for the church staff? Shouldn’t I be at the mall buying just the right gift for the choir director and my cousin Annie? How would I continue the timeworn tradition of replacing every knick-knack, towel, and dish with a similar item that reflected my Christmas spirit when I could barely make my way around the house?

I couldn’t, of course. So I pared down the list of Christmas presents, ditched the decorating, and let go of the baking bonanza. But there were still a few things to do, which meant I had to ask for help.

Even though I couldn’t drive, I felt awkward asking a neighbor to give my daughter a ride to school. I was embarrassed to enlist my parents to baby-sit. But when friends and family learned of my situation, they were happy to help. My parents took the girls on our annual excursion to the Chicago Botanic Garden for the Christmas train and flower display. A good friend helped me with some larger purchases for the girls.

God swept my feet out from under me, so to speak, in order for me to get over it. To not be so dependent on my strength, to ask for help, and most important, to once again focus on the “Eternal Word made flesh and bone / So we could be restored” (LSB 362).

And as my ankle healed, I realized that choosing not to act is harder than being unable to act. The pace is addictive; the “to do” list, long. Once the crutches and orthopedic boot were gone, would I be so willing to sit with my family? to revel in the presence of my Father and His Son? to “be still” (Ps. 46:10)?

To be honest, it was easy to slip into my familiar pace once I was back to “normal.” I attacked my lists with the same vigor I had before my injury. But when the time came to sit still and listen—to my Savior, my kids, my husband—I had no second thoughts about what I “should” be doing.

For when the time was full and right

God sent His only Son;

He came to us as Life and Light