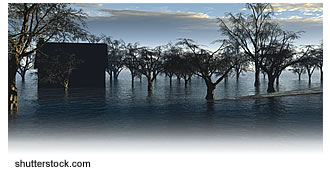 The Sunday after Hurricane Katrina hit, I was asked by Pastor Scott Schmieding to preach to his congregation, Trinity Lutheran Church in Baton Rouge, La. I shall never forget that morning—or those previous days!

People whose homes were destroyed and who were now refugees from the deluge filled the first few pews of the packed church. They wept. I consoled as best I knew how, preaching the cross and God’s love in the Gospel.

After the service, something remarkable occurred. Pastor Schmieding stepped forward to inform his gathered flock of numerous cases of immediate need. Various bands of chainsawarmed Lutherans were heading to sundry areas beset by the worst of the storm—in some cases to search for individuals believed trapped by the maze of high water, mud, downed power lines, and trees. 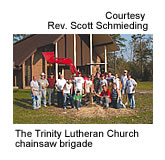 What followed stunned me. As soon as Scott finished asking for volunteers, the entire congregation pressed forward, en masse. That precise instant I realized that these dear people were hardly mere passive victims to be recipients of aid. They were suffering, to be sure, but they were the one body of Christ in that place, hurting but lunging forward in the morass and amid the chaos to love their neighbors,whether their neighbors were Lutheran, Christian, or not. These congregants would be the body of Christ on the front line.

A deluge of misery resulted in a deluge of mercy. Back in St. Louis, we met with John Scibilia of Lutheran Disaster Response New York. John was a veteran of 9/11, and we had asked him for counsel on the Synod’s response to Katrina. John urged us to immediately partner LCMS districts with individual congregations affected by the hurricane.

I took John to LCMS President Gerald B. Kieschnick’s office, and we presented the plan. The Synod president received it, wisely suggested we run it by a few members of the Council of Presidents, and then presented the plan to all the district presidents via a conference call. Southern District President Kurt Schultz weighed in. I walked back to my office in the International Center and assigned LCMS World Relief and Human Care deaconess Rachel Mumme the task of pairing congregations and schools with all 35 districts.

And the Synod responded like never before! Our dear people—congregations, districts, social-ministry organizations, national ministries, and offices—rushed to care not only for LCMS people affected but for whoever was in need. I have never, ever been prouder to be associated with The Lutheran Church—Missouri Synod.

To this moment, midst all the weaknesses and frailties this Synod bears, I view her with the most profound love and thankfulness. When this Synod joins hands and hearts, its capacity for good in the name of Jesus is beyond astounding.

LCMS World Relief and Human Care is all about partnerships. Why? Because we are the mercy arm of the church. And the church is a body, the body of Christ. None of us alone has the capacity, the wisdom, the experience, the ability to stand alone facing the deluge of misery which is this world.

There really is only one mission, message, and people. Together, washed by water and Word into one body; together, made one body by cup and loaf; together, proclaimed into being as Christ’s own body by His own Word, we cannot only stand and raise each other when we fall—we can respond to the misery with a deluge of mercy, in the name of Jesus.