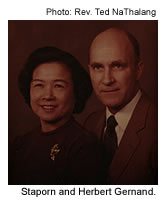 The gentle faith modeled by a stepfather makes a young Thai boy marvel at the Good News of Christmas—and wonder what that news means for him.

“From heav’n above to earth I come
To bear good news to ev’ry home;
Glad tidings of great joy I bring,
Whereof I now will say and sing:

As the clear tenor voice rang through the small room and out through the open windows into the warm December air, Pornprom NaThalang studied his new father’s face, a face so unlike his own.

The young boy’s heart was a swirl of conflicting emotions. A descendant of an honored Thai family, Pornprom’s upbringing stressed the importance of being a good Thai and a good Buddhist. With his American looks, his American ways, and his American God, Pornprom’s stepfather was anything but a good Thai.

And yet—Pornprom couldn’t ignore how his stepfather’s gentle teachings about his God beckoned. Daily, his stepfather gathered the family for devotions, and though the children’s English was limited, an understanding of this mysterious God began to emerge.

“To you this night is born a child
Of Mary, chosen virgin mild;
This little child, of lowly birth
Shall be the joy of all the earth.

Was this Savior truly for all the earth, even for brownhaired, brown-eyed, brown-skinned boys like him? Even for his beautiful mother, Staporn, and his three brothers and sisters, who until recently had matter-of-factly accepted the Buddhist traditions of their people? Puzzled, Pornprom listened and tried to understand more of the hymn’s foreign words.

“This is the Christ, our God and Lord,
Who in all need shall aid afford;
He will Himself your Savior be
From all your sins to set you free.

Could this be true? How could a little baby save all mankind? Pornprom fingered the good luck charm that hung around his neck. He and many Buddhists relied on such things to protect them from bad luck and danger, but even at his young age, Pornprom felt the heavy burden of fear. How could he ever do enough good deeds to merit good karma? Could this Savior truly deliver the freedom the hymn promised?

As the months passed, Pornprom continued to watch his new father, who patiently modeled the faith he hoped his stepchildren would someday embrace. As her husband taught in English from Luther’s Small Catechism, Pornprom’s mother carefully translated the words into Thai for her children. Slowly, the Holy Spirit began to take root in his heart.

“He will on you the gifts bestow
Prepared by God for all below,
That in His kingdom, bright and fair,
You may with us His glory share.”

The heavenly Father did indeed bestow untold gifts upon Pornprom—who now went by Ted, since the family had relocated to Fort Wayne, Ind. His parents enrolled their children in a Lutheran day school, where the teachers took Ted under their wings.

God’s plan for Ted began to take shape. Freed from the burden of his sin by the death and resurrection of Jesus, Ted felt compelled to share this Good News with others living with that same heavy weight. As a young newlywed, Ted decided to study at Concordia Seminary in St. Louis. When the time came for his first call, the Holy Spirit answered Ted’s prayer to send him and his wife, Gunya, back to their homeland. 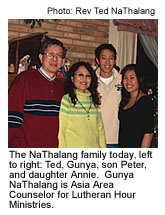 Now they could bring the Gospel to friends and family who were still living in spiritual darkness. But how to begin? The Bible seemed overwhelming to people who had never heard of concepts like original sin and Baptism. The students grew frustrated. Ted wondered how he could help them see the Savior. As he looked back on his own path, Ted realized the answer he needed.

He recalled his stepfather’s gentle teaching, translated into his language by his mother. The constant in all this was Luther’s Small Catechism and its answers to every new Christian’s question, “What does this mean?”

Now the young missionary knew what to do. Years earlier his mother had translated the first sections of the catechism into Thai. Ted knew he needed to complete his mother’s work and use this time-tested tool of the Spirit to bring the Savior to his people.

Again, the Holy Spirit opened doors to accomplish His will. As Ted searched for someone to help him translate and publish the catechism, he discovered the Lutheran Heritage Foundation (LHF), a Michigan-based mission organization dedicated to translating, publishing, and distributing Lutheran materials. 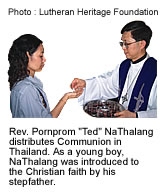 Ted accepted a call to serve at LHF. Shortly thereafter, the Thai catechism was rolling off the presses and into the eager hands of new Christians. As they read, Ted heard again and again how there was nothing like it in Thailand. No other book explained the Christian faith so simply and so well.

After only 12 months, the 3,000 catechisms Ted had expected to last for years were gone, snapped up not only by young Lutherans, but also by Methodists, Pentecostals, and Catholics who appreciated the simple explanation of Scripture. A second printing would be essential, and now Christians in Cambodia, Indonesia, Burma, and Vietnam were also asking LHF to translate the catechism into their languages. From heaven above to earth Christ has come—through Herbert, through Staporn, through Ted, through LHF—to the Thai people, and to the world.

Rev. Pornprom “Ted” NaThalang has served as LHF project coordinator in Southeast Asia since 1999. Currently, he’s overseeing the production of A Child’s Garden of Bible Stories for Thailand, Indonesia, and Cambodia. LHF, which is at work in more than 80 countries and 90 languages around the world, is a recognized service organization of the LCMS. LHF is celebrating its 15th year of translating, publishing, and distributing materials that are Bible-based, Christ-centered, and Reformation-driven. To learn more about the organization, visit its Web site at LHFmissions.org.