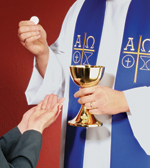 In the miracle of the ages, God became man and dwelt among us.

In a miracle of love that reaches down through the ages to us, the God-man Jesus Christ gave His true body and true blood as heavenly food.

He did it at Passover as the sacrificial Lamb of God on the night of His betrayal before the day of His crucifixion for the sin of the world. On that night, Jesus spoke deliberately and carefully these words that established and instituted the Supper. Concerning the bread that He had consecrated and distributed, He said, “Take and eat, this is my body which is given for you”; and concerning the chalice or wine, “This is my blood of the New Testament, which is poured out for you for the forgiveness of sins.”

This foundation of the spoken word of Christ is essential in understanding the central place of Holy Communion in the worship of the Church. The Lord’s Supper is not something that we do. Rather, the Lord’s Supper is something the risen Christ comes to do in the midst of His gathered people. As He does so, “the chief thing is God’s Word and ordinance or command. It was not dreamed up or invented by some mere human being but was instituted by Christ without anyone’s counsel or deliberation” (Large Catechism).

In the Gospel accounts and in 1 Corinthians, there is no word present that could be translated as symbolizes or represents. There is no indication that the words of Christ are picture language. Rather, God’s Word clearly teaches that in the Lord’s Supper the bread and wine are a participation (communion) in the body and blood of Christ. It clearly teaches that those who misuse the Sacrament sin against Christ’s body and blood.

The same is true for the blood. Krauth writes:

Neither the wine is imaginary, nor is the blood. According to Krauth, “That which we drink in the Supper is the shed blood of Christ, and that shed blood is the New Covenant, because the covenant is in the blood and with the blood.”

Martin Luther wrote in the Large Catechism that everything in the Sacrament of the Altar “is established from the words Christ used to institute it. So everyone who wishes to be a Christian and to go to the Sacrament should know them.”

Emphasizing that the greatest thing in the Sacrament is God’s Word, Luther pointedly asks and answers, “Do you think God cares so much about our faith and conduct that He would permit them to affect His ordinance? No, all temporal things remain as God has created and ordered them, regardless of how we treat them. This must always be emphasized, for thus we can thoroughly refute all the babbling of the seditious spirits who, contrary to the Word of God, regard the sacraments as something that we do.”

The sum and substance

Most recent Bible translations use the word “covenant” instead of “testament” in the texts where Jesus instituted the Lord’s Supper. Both are possible translations, but as Robert Kolb, a professor at Concordia Seminary, St. Louis, observes: : “If the word is understood as ‘covenant,’ it must be understood as the kind of covenant that is given by the king to his vassals. The king offers; the king imposes. The covenant is his gift to vassals who have no claim on his protection and rule. Christ’s Supper is likewise pure gift. … Thus, it is better to think of the Lord’s Supper as a last will and testament. Here Jesus bestows all His blessings, the blessing of forgiveness and new life, the blessing of His presence, upon His people.”

Early in his battle against Rome, Luther used the translation “testament” in its legal sense as his chief weapon. The Lord’s Supper was being treated as a sacrifice, a work of man to appease God, not as God’s free gift to His church. Luther stressed that the Lord’s Supper was Christ’s last will and testament by which He bequeathed to us all blessings. Citing Christ’s words “this is the cup of the new testament,” Luther wrote: “Not every vow is called a testament, but only a last, irrevocable will of one who is about to die, whereby he bequeaths his goods, allotted and assigned to be distributed to whom he will. Just as St. Paul says to the Hebrews that a testament must be made operative by death.”

This new testament, said Luther, depends totally on the Words of Institution.

Everything depends on these words. Every Christian should and must know them and hold them fast. He must never let anyone take them away from him by any other kind of teaching, even though it were an angel from heaven. They are words of life and of salvation, so that whoever believes in them has all his sins forgiven through that faith; he is a child of life and has overcome death and hell. Language cannot express how great and mighty these words are, for they are the sum and substance of the whole Gospel.

Because He is ascended to God’s right hand, Jesus has the authority to come and bestow this inheritance of forgiveness and life and salvation.

This was clearly expressed in the earliest years of our Synod by our first president, C.F.W. Walther: “The Son of God Himself is repeating the once-spoken words of institution through the mouth of the minister and thereby hallows, consecrates, and blesses the bread and wine so that they are the means of distributing His body and blood.”

Luther explained in a simple and straightforward way the clarity of Christ’s words:

“If these words are not clear, I do not know how to speak German. Would I not understand, if someone were to place a roll before me and say: ‘Take, eat, this is white bread’? Or again, ‘Take and drink, this is a glass of wine’? Therefore, when Christ says: ‘Take, eat, this is my body,’ even a child will understand perfectly well that he is speaking of that which he is offering. … These words are quite clear and explicit. … For this reason we stick closely to the words and close our eyes and senses, because everyone knows what ‘this is my body’ means, especially when he adds ‘given for you.’ We know what Christ’s body is, namely that which was born of Mary, suffered, died, and rose again.”

His Word; not our faith

In His promised gift, He is present for us. His presence is so certain that all communicants receive the body and blood in the Sacrament whether or not they believe. But not all receive the forgiveness, life, and salvation offered with Christ’s body and blood.

This is part of the basis for the loving practice of closed Communion. It is also a truth that is offensive to our natural human reason and religious feelings. The human heart does not care for mysteries that go beyond the mind’s ability to discern. How can it be that all who partake, whether they believe or not, receive the true body and true blood of Jesus Christ? But this is the unshakable nature of the inheritance Jesus gives in the new testament of His body and blood.

When the living Christ comes into the midst of His gathered congregation today and says “This is My body” and “This is My blood,” it is not a matter that human speculation can change. Luther says it clearly: “This is His Word, when He says, ‘This is my body,’ just as He says in Genesis [1:3], ‘Let there be light,’ and there is light. My friend, it is God who names or calls, and what He names immediately comes into existence, as Psalm 33 says, ‘He spoke, and it came to be.'”

What His lips offer is, as Luther said, the sum and substance of the Gospel or, as Krauth says, the heart of the Gospel. Krauth writes: “Christ is the center of the system and the Supper is the center of Christ’s revelation of Himself. The glory and the mystery of the incarnation combine there as they combine nowhere else. Communion with Christ is that by which we live, and the Supper is ‘the communion.'”

In giving this precious gift, Jesus did not make a new law commanding its daily or weekly observance. Yet, at first, there was a daily and then weekly use of Holy Communion. This is so because what Jesus gave to His Church is the inviting and absolving Gospel, not the insistent and accusing Law. The Lord’s Supper is a gift of life and love to be received, not a requirement to be fulfilled.