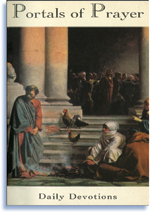 Sometime in the course of each day, hundreds of thousands of Christians pause for a brief Bible reading, reflections on God’s Word, and a prayer, guided by a little publication called Portals of Prayer.

This unpretentious little tool lands on kitchen tables, bedside stands, and other places in homes and offices throughout the country as it has for 70 years. With its printed circulation approaching 900,000, the magazine also takes other forms: online devotions; large print, Braille, and audio versions for the vision impaired; and a Spanish version.

“The heart of a solid devotion is the Word of God,” says Rev. Eric Forss, editor since 2003. “We are aiming to provide our readers scripturally sound devotions that encourage and strengthen their faith in Christ and their trust in the work He has accomplished for them through His death and resurrection.”

Published quarterly, each issue of Portals brings daily devotions for three months. It offers morning and evening prayers for each day of the week, prayers for special occasions, and a brief liturgy for family devotions.

You may have noticed that Portals of Prayer now has more prayers. “It was an opportunity to respond to our readers’ requests and to provide them with more useful resources,” Forss explains. “A lot of readers wanted to see prayers that reflect the festivals and commemorations of the church year as well as concerns that come up in their private lives, in the life of the church, or in their congregations.”

How does this work?

You may be surprised to know that the work begins almost three years before publication. For example, the writers for 2009 were selected last November.

“We look for clarity of thought, for writing ability, and for ability to communicate the Gospel of Jesus Christ,” says Forss, who also serves as pastor of Immanuel Lutheran Church in Howell, Mich. With a 250-word cap to each devotion, the editor admits, “Writing concisely, writing briefly is always more difficult. It takes a gifted writer to do it well.”

Once assigned, the authors prepare an outline describing the Bible text and provide a sentence for each day’s message. “Since the authors work independently, the same text may be chosen by more than one and then we’ll make adjustments so the readings remain fresh,” Forss says. Each author also is assigned one-third of the prayers for the issue.

At times Forss works with an author to craft a series based on his or her expertise. A future issue will have devotions by a professor with extensive background in teaching Luther’s Small Catechism. Another series, scheduled for the July-September issue, is based on Old Testament texts that point to Jesus Christ as the Messiah.

Forss is now editing the devotions for 2008. His task is to keep the writers on schedule, plus carefully examining each manuscript to check facts, assure Scripture passages are quoted accurately, and evaluate theology. A second editing by CPH staff attends to spelling, grammar, and sentence structure. Finally, each issue is reviewed for doctrinal accuracy.

CPH senior editor Rev. Scot Kinnaman shows a small bound volume from 1937 and explains how the first 80 issues carried monthly themes. “And you can already see the very familiar format that started,” he says. “In issue 81, the name was adopted and it has been Portals of Prayer ever since.”

He points out authors like O.P. Kretzmann, Richard Kramer, and John W. Behnken.

“Just some fantastic names in the history of our Synod [known] for solid work and solid reputation,” he says. “The publication has been in circulation for so many years that many who were part of its founding are now in the Church Triumphant. Some became well known and quite beloved, Rudolph Norden comes to mind.”

Expressing intent to honor what the publication has been, Kinnaman shows a new publication in the familiar format, but titled “Where Is God Now?” It’s a version of Portals for distribution in disaster or grief situations. “These are targeted devotions and targeted prayers and our first walk out into Portals-branded products that are not simply repackages,” he says.

The publication is used by LCMS World Relief/Human Care and is available for congregational use.

A Spanish version is in development. The publishing house is exploring Portals “podcasts” (downloads for MP3 players) and a print version for sale at checkout racks in chain and grocery stores. Beginning in the third quarter this year, Portals will add a few pages for more prayers and get a freshened design.

A daily form of Portals already appears on the CPH Web site (www.CPH.org) and an audio version on the KFUO Web site (www.KFUO.org). “Those two sites are often linked to congregational Web sites and the effect is that it goes beyond the 900,000 print circulation, how far is hard to calculate,” Kinnaman says.

Whatever the format, editor Forss emphasizes, “We’re really aiming to represent the Gospel of Jesus Christ who comes in the flesh to save the people whom God has made. That’s what we’re trying to communicate in fresh and relevant language and in Christ-centered language.”