From planting churches in remote West Africa to guiding inde-pendent churches as they send their own missionaries, Dr. Paul Mueller can trace a major transition in world mission, the role of missionaries, and the people they serve.

Mueller, now LCMS World Mission’s regional director for Africa, describes his first assignment in Liberia as “very local, very up in the bush, seven years of church planting” during the 1980s. From 17 churches, he says, there is now a national church with 135 congregations and about 25,000 members.

“Mission work in most places in Africa is at a different level than the traditional missionary idea that we grew up with—you go overseas and live in the jungle like Tarzan,” Mueller says. “Now we don’t go and plant churches; we go and partner with the national church that is there.”

In Africa and around the world, millions of people are still without Christ, but as one-time missions become full-fledged church bodies, they grow in their capabilities to handle their own outreach. As that growth continues, LCMS missionaries, in addition to planting churches, train evangelists, teach in seminaries, administer health and agriculture programs, and otherwise support partner churches in their development.

One of the results is that reaching people with the message of God’s salvation through Jesus Christ finds partnerships such as a Brazilian and an American working together in the Dominican Republic, a Nigerian serving in Jamaica, or Latin Americans in Spain and Portugal. Meanwhile, seminaries and training programs for pastors, deaconesses, and lay evangelists cross boundaries of nations and church bodies, and local leaders apply ingenuity to introduce people to Jesus.

“We’re discovering that the missionary force of the 21st century is an international Lutheran community,” observes Dr. David Birner, associate director of LCMS World Mission and head of the International Mission Team. “The LCMS is joined by Asians, Africans, Latin Americans, Europeans. We’re starting to get side-by-side with our partners from other parts of the world. We’re trying to connect and organize so that our missionary efforts cross more than gender and age groups, but also national boundaries where we have different cultures.”

Africans have a strong missional attitude, and churches are forming their own partnerships, Mueller observes. Their outreach is effective because they know the people, the language, and the culture. “Some of the emerging churches are still learning, but the more they send missionaries—and as we help them get things going—they end up as sustainable, reproducible, independent church bodies.”

Mueller adds: “It really is exciting for the national church that sends. And it’s great for the receiving church as well. They see their African brothers concerned about them.”

Today, a Nigerian serves in The Gambia, a Ghanaian in Uganda, and a Nigerian in Jamaica. And the church in Brazil isproviding a missionary in Kenya. While the LCMS assists as a funding church, the sending and receiving churches also identify their support for housing and other needs. “The bottom line is when we all sit around the table and everybody says, ‘This is what we can do,’ we’re all happy,” Mueller says. 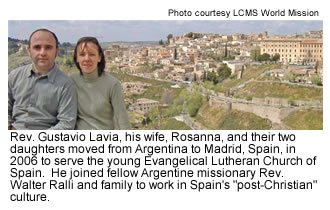 Rev. John Mehl, LCMS World Mission regional director in Asia, observes that foreign mission for all U.S.-based Christian mission organizations has changed since the 1970s. “Much of this is the result of the wonderful efforts of those missionaries who have gone before us and scattered the seed of the Gospel, and watered and tended small churches,” he adds.

Mehl believes a good witness does not break laws to spread the Gospel in limited-access Asian countries, but the LCMS, with its solid theology and teaching, can work in other ways.

“Often, the role of the LCMS is to help partner churches spread the Gospel where we cannot,” Mehl says. “The LCMS is known around the world for teaching the Word of God without any funny business, and our partners want that teaching for their own workers.”

He observes that Asians think collectively and like a longer process of discussing options as compared to Westerners, who prefer quick decisions. “As we consider how we work with partners, we need to be careful to be true partners, remembering the need to allow the Asian process to work, even if it takes more time,” he says.

Worldwide, companies are tapping the labor market of Asia, and the LCMS is responding through its strength in education. The LCMS Hong Kong International School has a strong reputation for serving the children of international business representatives and diplomats. LCMS World Mission tapped that model 10 years ago when it opened Concordia International School in Shanghai, China. It now enrolls more than 1,200 students.

God’s Word shapes strategies, training, and assembling of new believers as work progresses in Russia and other countries of the former Soviet bloc. “Just as the apostle Paul became all things to all people, today missionaries are studying the language, laws, culture, and communities. They are incorporating that knowledge in the proclamation of the Gospel,” says Rev. Brent Smith, regional director in Eurasia.

Partners in Eurasia are moving into the public arena, he adds. Leaders of the partner church in Latvia helped craft parts of the religious curriculum taught in schools. Their youth recently completed a “prayer walk” as part of their youth gathering, singing hymns as they stopped for public speeches and made their way to an open-air Christian concert. Some leaders from partner churches are delivering Christian lectures at universities in Russia and Turkey.

“After less than 10 years of work in the Muslim majority context of Kyrgyzstan, the Spirit has assembled 45 churches with more than 300 baptized and approximately 2,000 people in regular study of the Word,” Smith reports.

The partnerships have benefited from developments in technology, communication, and transportation. Christian and Kazakh folk songs, played on the dombra (a two-stringed, long-necked lute), recently received 11,000 hits when they were uploaded on YouTube, the popular Internet site. The Central Asian Lutheran Seminary provides distance learning using DVDs, accompanied by small-group seminars with missionary mentors.

During his early service in Africa, Mueller relied on mail that took six weeks to be delivered and sent. “So it would be three months before we could actually exchange letters,” he says. “Now there are people standing outside where I used to live, using cell phones and calling internationally.”

In Eurasia, Web-based individual and team calendars and automated e-mail help missionaries plan events and track activities across 22 countries. Smith says almost all documentation is filed online with high-security encryption. He adds that resources such as Luther’s Works and the Concordia Electronic Library from Concordia Publishing House enable missionaries to carry “a truckload of books” across borders on their laptop computers or personal data assistants. 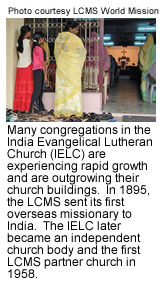 Another component in the partnerships is the increasing role of short-term mission teams, as members of LCMS congregations travel to mission fields to build or remodel facilities, provide medical clinics, teach Vacation Bible School, and offer other service. Birner says LCMS World Mission is trying to serve as a channel for productive cooperation that allows continuity that complements the work of long-term missionaries.

“We talk today about our missionary force being all of us,” Birner says. “LCMS work is only one part. We’re seeing an added dimension in learning to work together as we gear up to face a largely Muslim-Christian world. That’s going to be our major issue in the next 20 to 30 years.”

Smith notes that about 2 billion Christians live in a world of 6.7 billion people—of whom God wills not one be lost, so LCMS congregations are also in partnership with their missionaries in a daily task— “namely, to share the Gospel of Jesus Christ with the unreached and uncommitted” while they themselves live in the Lord’s forgiveness given through Word and Sacrament.

Distinctions between U.S. and international missions are diminishing, says Dr. Robert Scudieri, LCMS World Mission associate executive director of National Mission. In the 21st-century, we should be thinking about this as a circle, with immigrants to the united States reaching back to their homelands and then receiving gifts of talents and treasures for their work here.”