Memorial Day weekend in Indianapolis is synonymous with the “500.” The sweet smell of high-octane fuel, the pungent aroma of hot oil and overstressed tires, the spectacular noise, the press of 350,000 enthusiastic fans—these are the sights and sounds of the Indianapolis 500. 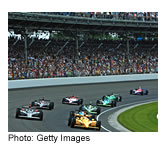 For much of Leo Mehl’s career, the sights and sounds of “Indy” were a part of his workaday world, first as a tire engineer for Goodyear, and then, beginning in 1967, as manager of Goodyear’s international racing department, and later (1974–96) as director of the company’s racing division.

After retiring from Goodyear, Mehl served as executive director of the Indy Racing League (IRL) and as a vice-president of the Indianapolis Motor Speedway from 1996 to 2000. Today, he remains a consultant for the IRL.

While few outside the automotive industry may be familiar with his name or accomplishments—Goodyear was the undisputed king of the racing-tire hill during his tenure as director of the company’s racing division—Mehl, a member of Gloria Dei Lutheran Church in Hudson, Ohio, is acknowledged as an industry leader by his colleagues. Last August, in recognition of his decades-long contributions to the sport, he was inducted into the Motorsports Hall of Fame in Novi, Mich.

I first met Mehl—known by many as a “force of nature”—and his wife, Marjorie, while I was serving as Gloria Dei’s pastor. After a nomadic existence that had taken them to the far corners of the world as part of the global racing family, they were in search of a regular church home, one that would nurture them with Word and Sacrament and sustain them in their faith-life. During a follow-up home visit, we spoke of faith and their spiritual needs. We read Scripture and prayed.

Not a word was said about the scope of Mehl’s achievements in his chosen vocation. Subsequently, Mehl joined our men’s ministry, the “New-Man Group,” and he and Marjorie prepared themselves for membership in Gloria Dei.

Through my growing friendship with the Mehls,through their participation in church activities, and through a visit with them to the 2006 Indianapolis 500, I learned that motorsports professionals are “on the road” for much of their careers, and that racing families and others in the sport often turn to chaplaincy services such as the Indy Racing League’s IRL Ministry for spiritual nourishment and, from time to time, counseling and crisis intervention.

They gather in garages or infield tents, or maybe in the catacomb-like mazes that inhabit the undersides of grandstands, for prayer, Bible study, devotions, and worship. For Mehl, these ministries often served as his “home away from home.” Like any family, motorsports families need a “faith pit crew” because of the challenges of the racing life, he observes.

For me, Mehl’s career is a reminder that ministry is found where people live, even if sometimes that might be under the hood of a racecar in a track garage. I also find in it a reminder that God is the Author and Finisher of our faith, and that the nomad has a permanent place in the family of faith.

When he speaks about his achievements, Mehl is quick to credit his colleagues and co-workers, his “pit crews.” I find a spiritual reminder there, too. When we are in need of encouragement, we also have a muchneeded “pit crew.” God greets each of us, whatever the station of our lives, with celebration and joy.

God’s only begotten Son finished His race. He willingly gave His life in exchange for ours. When Jesus spoke the words on the cross, “It is finished,” He was speaking about all that needed to be done concerning the salvation of humankind. Finishing our race is now secure because of “The One” who first crossed the line. On Easter morning, as the stone was rolled from the tomb, I can imagine God the Father waving a checkered flag in celebration of this eternal triumph.

That is a victory in which the Mehls rejoice, and in which we can all rejoice.

New Men in Christ: A ‘Pit Crew’ for Men’s Ministry

I am a great advocate of outreach and evangelism. As with my current congregation, Grace Lutheran in Ashland, Org., and with all the congregations I have served, at Gloria Dei we intentionally formed a “pit crew” for our men’s ministry effort.

Called the “New-Man Group,” participants gathered once a month at 7 a.m. on Saturday for coffee, friendship, Bible study, and breakfast. It was one of the activities to which I invited Leo Mehl. The group was a place to ask questions, establish connections, and engage in honest conversation.