First Lutheran Church (FLC) in Boston is known for welcoming young adults with open arms. Located in one of the largest college towns in the world, the 300-member church has an opportunity to reach thousands of undergraduate and graduate students from every corner of the world.

As the only LCMS church within Boston city limits, FLC also attracts students who are motivated to keep their faith alive and replicate some of their home-church experience—students such as Lizzy Spira and Jessica Flakne. The two connected the summer before their freshmen year at Harvard, and, according to Flakne, became “church buddies.”

“Lizzy and I started going to FLC together the first Sunday we were here,” she remembers. “The rigor of any college makes it difficult to get up and hop on the train Sunday mornings for an 8 o’clock service, but church is important to me. It was nice to have someone I could feel comfortable calling and going to church with.”

At First Lutheran, Spira and Flakne also made new friends. “Most young adults at FLC are graduate students or just out of college, but some were affiliated with Harvard Graduate School or the Law School,” says Flakne, whose home congregation is Grace Lutheran in Nashua, N.H. “It was nice to have that link, but we realized our schedules would make it difficult to attend most SYA activities.” (SYA—Students and Young Adults—is a ministry of First Lutheran Church.) 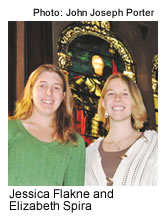 As a freshman at Harvard College (the undergraduate component of Harvard University), Elizabeth ‘Lizzy’ Spira, a member of Peace Lutheran Church in Fort Wayne, Ind., tried to find a student fellowship similar to the weekly early-morning meetings she attended at Concordia Lutheran High School in Fort Wayne. Even though Harvard had plenty of student organizations and religious groups, they didn’t quite meet her needs. Undaunted, Spira and several other LCMS students worked with First Lutheran Church in Boston to establish the first Lutheran student organization in Harvard’s 372-year history.

“Some of the Harvard students at FLC were interested in getting some sort of campus group going,” Spira says. With the encouragement of FLC leaders such as congregational president Brian Harms and education director Bethany Tanis, a core group began meeting weekly in November 2007 for devotions and Bible studies on campus.

“Our discussions about life had a lot more meaning for me than any other conversations I had during the week,” Flakne notes. “It was nice to sit down with people of similar values and beliefs who cared about you, who looked to the same places—their faith and their God—for support. To have a group like that on campus was great.”

The core group enjoyed their meetings so much they decided to submit the necessary paperwork to gain college-approved student-group status and attract more members.

“There are over 400 student groups at Harvard; the key to becoming a new one is to prove to the committee that there is no other group there like ours,” Spira says. With the help of FLC members James Chang (Harvard Law School, 2008), Courtney Koontz (Harvard Divinity School, 2008) and Harvard graduate student Jason Heindl, they drafted their proposal, which included a purpose statement and constitution.

“We cited facts about the prevalence of the LCMS in America, noting the number of LCMS campus ministries at universities all across the country,” Spira says. “We also discussed theological differences between an LCMS group and other religious student organizations at Harvard.”

In February 2008, “LCMS Lutherans at Harvard College” (LLHC) achieved student-group status. With that status came such privileges as the right to reserve space for meetings, open an account with the Harvard University Employee Credit Union, and apply for funding for events and projects.

“It’s the first time in FLC’s 169-year history that we made an official inroad at Harvard,” notes Pastor Ingo Dutzman. “Liz Spira was a key ingredient in that success.”

For Tanis, LCMS Lutherans at Harvard College is a great start for FLC’s current campus-ministry efforts.

“What we’re trying to do is get students plugged into a local congregation to hear the Word and Sacrament,” Tanis says. “Thinking long term, we would like to call an LCMS pastor who can minister to the college and the students and be a chaplain.”

Harms agrees. “A strategic effort involving full-time staff and/or volunteers reaching out to universities would be my dream,” he says. “I believe we have the capabilities and resources to do it—it’s all about orienting ourselves to do it.”

“The workshop was inspiring and humbling at the same time,” Harms says. “It made us realize that if we want to be intentional about campus ministry, we have a lot of steps to take and a lot a praying to do.”

Dutzman also enjoyed the workshop, but still feels that the church’s strongest link to universities is the students themselves.

“I have a feeling that if we could properly identify LCMS students on campuses, it would be a significant number of young people,” he says. “When those students become convinced that what they are on earth for includes being a witness for their faith, they are very good at bringing other students to visit the church.”

In the 2008 spring semester, LLHC worked their way through Gene Veith’s Loving God with All Your Mind, which discusses how Christianity and academics can relate and strengthen each other, particularly in an atmosphere such as Harvard’s.

“We gained some more interested members with this discussion, and a few more at the Freshman Activities Fair and Introductory Meeting in fall 2008,” Spira says. “The first semester of this year we spent reading through C.S. Lewis’ Mere Christianity.”

And the potential for dialogue between faiths and among unbelievers is there.

“While we are centered on the conservative LCMS theology, we welcome anyone to come to our discussions, and some people have taken us up on the offer,” Spira says. “It’s interesting when we discuss C.S. Lewis’ chapters on the existence of God with an atheist, or Lewis’ view on forgiveness with a United Church of Christ member.”

“The idea is that it’s a confessional Lutheran group that is ‘living out’ its confession by welcoming people who are possibly another religion or not even Christian at all—that’s exciting for us,” Tanis notes.

“Harvard is not the hotbed of pagan activity some people had led me to believe it would be, but it is still difficult to find people willing even to discuss their religious beliefs,” Spira says “I think it is positive to have a student group that seeks to both explain and stand up for its beliefs.”

Diane Strzelecki is an editor-at-large for The Lutheran Witness. She is a member of Prince of Peace Lutheran Church, Palatine, Ill.

Having a Heart for Students

In May 2008, I had the privilege of leading a campus ministry training workshop for the Student Ministry Task Force at First Lutheran Church, notes Rev. Greg Fairow (left), the LCMS first and only campus mission catalyst. They are very excited about their potential for reaching out to students.” 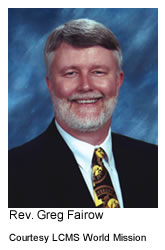 According to Fairow, he usually begins with the church. I often work with an associate pastor or rostered church worker to equip them for campus ministry,” he says. “Sometimes a church has a group of laypeople with a heart for students—parents and grandparents of students, recent graduates, or even faculty or administrators of the college—who attend the workshop.”

On the other hand, LLHC is the vision of a student and her peers. “For a student to take such initiative is unusual,” Fairow says. “All in all, the healthiest campus ministries are the ones with an appropriate balance between the sponsor church and the student organization.” D.S.

LCMS World Mission works in partnership with the Lutheran Campus Mission Association (LCMA) to “equip leaders to make disciples who make disciples on campus,” according to LCMAs mission statement. For more information, contact Greg Fairow at greg.fairow@lcms.org or 319-351-LCMA (5262).  —Ed.