On May 1, 2003, Aron Ralston cut off his right forearm. This is extreme; perhaps you have heard his story. 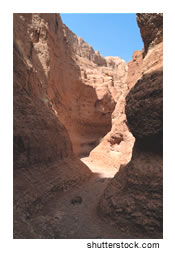 At the time, Ralston was 27 years old. He had hiked into the beautiful, remote canyons of Utah. What was to be an afternoon outing became a weeklong life-or-death ordeal. Only a short time into Aron’s expedition, an 800-pound boulder tumbled loose, fell on his wrist, and pinned his right hand to the canyon wall. No one knew where Aron was located. He had 20 ounces of water, very little food, a small amount of climbing gear, and a pocket knife. It was an extreme situation.

For six days Aron exhausted every effort to free himself and his hand from the predicament. When the water was finally gone, Aron knew that by the time a rescue team found him, he would be dead. It was then that he realized the only remedy to this extreme situation: Aron Ralston would cut off his forearm and hand.

In his bestselling book, Between a Rock and a Hard Place [New York: Atria Books, 2004], Aron describes the solution with almost emotional detachment: It was no longer his arm pinned by the 800-pound boulder—it was his life. Aron made a tourniquet from his climbing gear and performed the “surgery.”

For the Baptized of Christ, Aron Ralston’s story portrays the extreme death-to-life experience of Lent—of springtime and rebirth. Aron gave up the one thing that stood between him and life. The Baptized do the same. This is the work of the Holy Spirit who convicts us of sin and leads us readily—and repentantly—to give up anything and everything that holds us captive. We are delivered. This is extreme.

Romans 6:3–5 says this: “Do you not know that all of us who were baptized into Christ Jesus were baptized into His death? We were buried therefore with Him by Baptism into death, in order that, just as Christ was raised from the dead by the glory of the Father, we too might walk in newness of life” (ESV, italics added). This is extreme. This is Lent. This is the springtime and rebirth received through faith in Jesus.

The Scriptures insist upon the extremes of the new life in Christ. In Matthew 5 and Matthew 18, Jesus says, “If your hand . . . causes you to sin, cut it off and throw it away. It is better for you to enter life a cripple . . . than . . . to be thrown into the eternal fire.” If Aron Ralston had not cut off his arm, presumably he would have been found days later in one piece—and without life.

When the rich young man asked Jesus what he must do to inherit eternal life, Jesus said, “Sell what you possess and give to the poor . . . and follow Me” (Matt. 19:21). The rich young man’s wealth stood between him and Jesus like an 800-pound boulder. The Scriptures tell us that the rich young man went away sad. He could not give up his wealth.

When Jesus died on the cross, He did so to forgive and deliver us from the 800-pound burden of sin, and when He rose from the grave, He did so to give us victory and new life. This is the extreme death-to-life experience of Lent. Victory and new life are ours in our Baptism, and they are ours to embrace through faith in Jesus. 2 Cor. 5:17 says, “If anyone is in Christ he is a new creation. The old has passed away; behold, the new has come” (italics added). This is extreme. The old is no longer a part of you. You may need to say that a time or two: This “thing”—this sorrow, this shame, this circumstance and situation—is no longer a part of me. You may need a Christian friend to remind you of the same—not in judgment and condemnation, but with a humble, gentle reminder: You are a new creation in Christ.

Heroic as Aron Ralston’s extreme action was, it pales in comparison to the extreme action of Jesus when He delivered the Baptized from the prison walls of death. St. Paul tells us, in 2 Cor. 5:21, that “He made Him to be sin who knew no sin, so that in Him we might become the righteousness of God!” Jesus took the 800 pounds of every sin, of every person, of every generation so that we would be set free. For six hours the anguished body of Jesus was pinned to the cross of Calvary and “by His stripes we are healed.”

With almost emotional detachment Jesus measured the extremes of what He must do to rescue you and me and all people. For your sake and mine Jesus was severed from His Father and damned to hell. “My God, My God, why have you forsaken Me?” were His words. This is extreme. This is Lent.

With almost emotional detachment you can walk out of the canyon that has been your prison. Fill in the blank for yourself. Do not rely on me to tell you what it is. Whatever your sin, whatever your sorrow, whatever your shame, it no longer has power over you. You may be a hand short or missing something else. It might be a broken heart—or a relationship that was not for you to have. You may have to confess a sin, or right a wrong, or acknowledge a lie and deception. You may need to reconcile a difference or apologize. But you are free. And there is no point in going back to where you have been.

Aron Ralston is now an inspirational speaker. He talks to schools, businesses, and civic organizations, telling his story of courage and new beginnings. He gives hope to people who have experienced great losses in their lives. You are an inspirational speaker, too. You are now Christ’s witness and ambassador, telling others of the great death-to-life experience of Lent. You can now tell others how Jesus gave up everything so that you could have eternal life and daily hope. This is extreme. This is Lent.