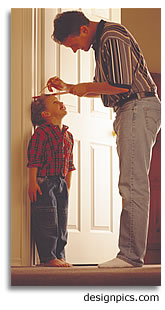 Are fathers really all that important? Is there a unique contribution that fathers provide for their children, particularly for their sons? Is there something missing in a boy’s life when a father isn’t present?

Our contemporary culture struggles to answer these questions for several reasons, but the most obvious reason single-parent households, usuallyis because there are so many headed by mothers who are working very hard to do the best they can for the children they love. To point out that something’s still missing in spite of their best efforts seems thoughtless, if not cruel.

Nevertheless, if we look at the questions from the perspective of our heavenly Father, as He’s revealed  Himself to us in His Word, we can affirm the influence of dads without heaping guilt on overworked moms.  The Old Testament in particular has a lot to say about this subject; but it comes from a different cultural setting with different home-life expectations. Women raising children alone were not at all uncommon in ancient Israel either. In fact, the situation receives comment throughout the Old Testament.

God Cares for the Fatherless

Unlike today, when there may be many reasons why a boy’s father isn’t available, in ancient Israel there was generally one reason, the child was an orphan. The significant role provided by the father in the home was most deeply felt by its absence. That is why we find the word fatherless 42 times in the Old Testament ESV translation.

There were three circumstances that put a person at risk in ancient Israel: to be an alien (sojourner), to be fatherless, or to be a widow; and each receives special attention from the Lord. God Himself promises that He will execute justice for the fatherless and the widow (Deut. 10:18). God makes sure that the fatherless aren’t scorned or excluded from the worship life of the community (Deut. 16:14). They are granted the right to glean the harvest fields and to receive a portion of the tithe (Deut. 24:20; 26:12).

Over and over again, not only in the Law but also in the Prophets, God warns His people not to mistreat or cheat the fatherless (Ex. 22:22; Jer. 22:3). To mistreat the fatherless and the widow is to demonstrate the worst forms of evil (Ps. 94:6; Mal. 3:5) but to care for the fatherless and the widow is a sign of righteousness (Job 29:12). No greater curse do we find in the Psalms than this: “May his children be fatherless” (109:9)—and that’s not merely wishing the death of the enemy, but for the desolation of his children, too. According to Scripture, to be without a father is serious business.

How serious? To be fatherless is so serious that the community around the fatherless has a responsibility to be “father” for the fatherless! In today’s world, like the Old Testament, fatherlessness can bring with it severe economic disadvantages. Statistics tell us that the greatest predictor of poverty in the United States is single-parent families. Yet, there is a type of poverty more serious than not having one’s physical and material needs met as one might want. There are genuine spiritual needs. There are deep relationship needs, too. I believe these needs are different for a boy than they are for a girl, and it has to do with a boy’s relationship with his father.

Spiritual growth takes place as the Holy Spirit works through the Word to bring faith, and then strengthens faith through the Sacraments. When I was a child, like St. Paul (1 Cor. 13:11) I thought like a child, and phrases like “Word and Sacrament” seemed vague and abstract. I couldn’t wrap my head around what they really meant. I needed to see what those words meant in action. Because I had the gift of a faithful Christian father, I had the example that I required. I needed someone to show me what it means to be a man of God and a man of faith.

So what’s missing, especially for a boy, when dad’s not around? To answer that question, and in so doing to affirm the importance of a father in a boy’s life, I began to think about what I would have not seen, heard, or observed if I had grown up fatherless. What would I have missed?

Tales of an Absent Model

The first thing I would have missed is my earliest memory of sitting on my dad’s lap in church during the sermon, with his big arms around me and me playing with his thumbs. I wouldn’t have seen both my parents going to Communion (this was long before the time when small children were welcome at the rail), and then when they returned, kneeling in the pew in a prayer of thanksgiving.  Had I been fatherless, I wouldn’t have observed that a man of God is humble before the Almighty.

Had I been fatherless, I would never have had my father as my seventh-grade Sunday School teacher, nor watched him study the Bible on Saturday night, preparing as well as his farming and management skills permitted so that he could engage bored, disinterested early adolescents. I wouldn’t have noticed that a man of God does not give up, but persists in trusting the Word and its power.

Had I been fatherless, he wouldn’t have been present for me to test myself against when we were harvesting the crop, racing down the rows to see who was fastest (it wasn’t me). I never would have overheard him speak to my mother as we were washing up for lunch those words that to this day continue to motivate and inspire me: “There’s a boy after my own heart.” After hearing those words, there wasn’t anything I wouldn’t do for my dad. If I had been fatherless, I wouldn’t have learned that a man of God is slow to anger, slow to criticize, but quick to praise and encourage those he loves.

Had I been fatherless, I would not have been in that neighboring church on a hot Sunday morning for the adult Baptism and confirmation of one of my dad’s co-workers, a woman with whom he had shared the account of Jesus’ life, death, and resurrection at the right time in her life so that the Holy Spirit, working through the Word, brought her to faith—a woman whose earthly life wouldn’t be that much longer due to cancer but whose eternal life of faith was just beginning. If I had been fatherless, I wouldn’t have had that example of a man of God sharing his faith in witness to Jesus Christ.

Had I been fatherless, I would not decades later have overheard my dad in conversation with the president of Concordia Seminary, St. Louis, following the service at which I was installed as an assistant professor. “You must be proud of your son”; to which my father replied, “We are proud of all our children.” Even in my late thirties, had I been fatherless, I wouldn’t have been reminded as a father myself that a man of God loves all ofhis children to the best of his ability, prays for them, and thanks God when those children trust in Jesus.

I recognize that each of those qualities I absorbed by watching my father—regularity with humility in worship, persistence in the face of discouragement in teaching God’s Word,  judicious use of encouragement as motivator and reward, willingness freely to share Jesus with others, and showing no favoritism but appreciating each son or daughter for who they are—could very well have been modeled for me by my mother, and in many ways they were. But it wouldn’t have been the same. I was a boy. I wanted to be a man. A man needed to show me.

Are you a father? Do you hope to be? Who has shown you? For whom are you the model? The great thing about this father-son relationship is that it doesn’t have to be a biological father in order for it to work; not in God’s economy. He’s modeled it Himself for us, first by taking the title “Abba, Father” (Rom. 8:15) and then becoming our true Father by adopting us as His sons (Gal. 4:5). We have been loved by our heavenly Father through Jesus Christ’s life, death, and resurrection, and through faith given us by the Holy Spirit, we are called His brothers (Heb. 2:11).

I realize that these passages are not to be interpreted in a gendered way—all believing men and women are “sons of God” through faith in Christ Jesus, and we are all as much sisters as we are brothers in Christ. Yet, the point I want to make is simply this: a boy as a child needs someone to look up to, and to want to be like, to have as a model of what it means to be a Christian man. Though no Christian man would think himself worthy to assume such a role, for Christ’s sake each Christian man is capable of modeling what it means to confess sins, be forgiven, and live for Jesus Christ. That’s really all that’s needed. That much I think we can do.