What is the largest Lutheran university in the world, and where is it located? In Germany? Scandinavia? America? It’s not where you think. Try Brazil, of all places, where ULBRA (Universidade Luterana do Brasil, the “Lutheran University of Brazil”) holds the record with 140,000 students. On its main campus at Canoas, just north of Porto Alegre at the southern tip of Brazil, 32,000 students are enrolled.

At its 14 satellite campuses across the nation, 34,000 attend, while 74,000 pursue their studies via distance learning. Not only is ULBRA the largest, it is also the youngest Lutheran university in the world, founded only some 36 years ago. And, for good measure, it is also the only Lutheran university on earth owned by one local church, namely St. Paul Evangelical Lutheran Congregation in Canoas.

Other astonishing statistics might be listed here, but—more than anything else—this is an example of what can happen when someone’s great vision meets great opportunity in a context of divine blessing. The “someone” in this case is the present rector (president) at ULBRA, the Rev. Ruben Eugen Becker. 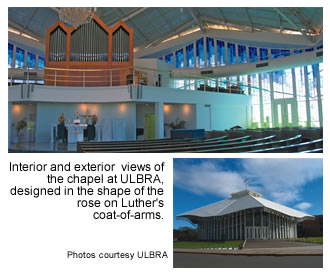 Becker, the youngest of six children, was born in 1936 in Rio Grande do Sul, the southernmost state in Brazil. LCMS Pastor John Muller led him to study for the ministry, and young Ruben graduated from Concordia Seminary, Porto Alegre, in 1960. He married his lovely wife, Luisa, and they have two children, Leandro and Ana. So far, nothing seems that unusual in his biography, but this would all change in 1966, when he accepted a call to St. Paul, Canoas.

The church was struggling with fiscal difficulties, and one way to balance the books—he was advised—was to close the congregation’s parochial school that had only a small enrollment, between 90 and 100. Not only did Becker refuse to close the school, he soon founded five more in the area.

But where were their graduates to get a good Christian secondary education? Several Lutheran academies soon followed, thanks to Pastor Becker’s vision, and, finally, a college, oddly named Faculdades Canoenses, the Canoas Faculties. But that name was soon changed to ULBRA. In 1979, 1,717 students attended. By 1990, the number grew to 5,500.

By 2000, ULBRA had become the fourth largest university in Brazil, and today the student population numbers more than 140,000, including the satellite campuses across all parts of Brazil. This mega-university offers no less than 81 undergraduate and graduate programs. ULBRA’s medical and dental schools are among the finest in the nation, with four hospitals on its campuses. Nor should we overlook the elementary and secondary schools that led to all this: There are 17. The statistics, in so short a time, tend to boggle
the mind. 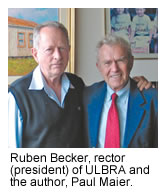 Ruben Becker himself, however, is anything but a lofty academic potentate. He is extremely approachable and a delightful conversationalist. His wife and daughter serve as receptionists at his office in ULBRA’s administrative headquarters, where he keeps a picture of the original schoolhouse in Canoas that started it all. Nor does his vision end with ULBRA. The Rector has even greater plans for the university, and envisions future outreach via the broadcast media involving satellite transmission of the Gospel in Portuguese, which, he points out, is the fifth most widely spoken language on earth.

A Stroll through the Campus?

When I was privileged to visit ULBRA not long ago, it turned out that the 620-acre main campus at Canoas was too vast for a stroll. Rather, it was a case of hopping in and out of a car driven by my guide, Dr. Johannes Gedrat, director of church relations at ULBRA. My immediate impression was not merely the extremely well-planned layout of the campus, but something one hardly ever sees at a university today: all the buildings were in the same architectural style, principally, a creative use of red brick. Most colleges and universities in America offer half a dozen different architectural motifs, ranging from Victorian to avant-garde, duly reflecting the age of the institution. ULBRA, however, is little more than one generation old, and can thus provide such a harmonious academic panorama. 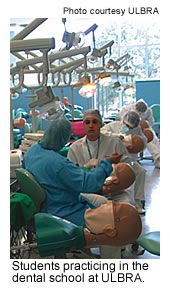 At the western end of the campus stands a huge hospital and medical-school complex. Near it is the number-one dental schoolin Brazil, complete with the very latest in technical equipment. Moving further eastward, one encounters a whole university city full of classroom buildings, libraries, dormitories, dining halls, reflecting ponds, and even brand-name concessions and stores. Spacious athletic facilities dominate the eastern third of the campus, since ULBRA also has a distinguished record in sports, its teams coming home with myriad trophies.

Then there is a lavish glass-walled Museum of Technology, four floors of which house both a string of products developed by science and an incredible collection of automobiles from every era since the beginning of the horseless carriage. Ruben Becker loves cars, and a favorite hobby of his is to buy wrecks at bargain prices, then have his engineering-school employees restore them in a handsomely equipped shop at the southeastern edge of the campus. The collection is so well done that no less than Emerson Fitipaldi, after searching the world for the museum in which to park his winning Indianapolis 500 race car, chose ULBRA.

And the Lutheran Factor?

How many, many American colleges and universities founded for Christian purposes have wandered from their religious moorings and are now totally secular centers for higher learning! Has the same happened to ULBRA? The astonishing, heartening answer is no, not at all.

To be sure, no one is claiming that the student multitudes attending ULBRA on its various campuses have even a simple majority of Lutheran students. In fact, only a small percentage of them are Lutheran. Nevertheless, ULBRA serves the cause of Christ in remarkable ways. Structurally, of course, one cannot miss the huge white circular chapel with stained-glass windows in the very center of the university complex. It is designed in the shape of a rose, the white rose in Luther’s coat of arms, as is the logo of the university. But more, far more.

There are Lutheran chaplains on all the ULBRA campuses as missionaries to the unchurched. Daily or weekly in all ULBRA units there are devotions or reflection moments and even services in a variety of styles in order to reach people from all backgrounds, religious or otherwise. Any event at an ULBRA school is supposed to begin with a brief devotion by a chaplain, and most of the campus pastors also teach Religious Culture classes. In every graduation ceremony, the first to speak is a Lutheran pastor, who also hands a Bible to each graduating student.

The new campus of Concordia Seminary is located nearby to the north, and every morning students there are bussed to the main campus of ULBRA where they take general courses free of charge, returning in the afternoon for their theological instruction. A further chapter could be written about the dramatic music ministry of the St. Paul congregation in connection with ULBRA—five choirs, six contemporary music bands, eight organists—as well as their successes in publishing and radio-television broadcasting.

Perhaps of most interest to members of The Lutheran Church—Missouri Synod is the fact that all these remarkable successes, obviously blessed by God, are by members of our own partner church, the IELB—Igreja Evangelica Luterana do Brasil— the Evangelical Lutheran Church of Brazil. Even Ablaze! is very active there also, as is Cristo Para Todas as Nacoes—Bringing Christ to the Nations, the Brazil Lutheran Hour.

A warm salute to our brothers and sisters in the southern hemisphere! You have shown us what vision and dedication can accomplish with the help of God.