In our culture today a growing number of families are without a “father figure” in the home. If having an adult male to look up to is as vital to a boy’s maturation as I believe it is, doesn’t this place single moms in an impossible situation? 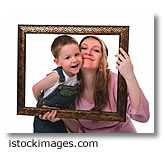 The fact that God’s Word draws so much attention to widows and the fatherless emphasizes God’s special concern when a male role model is absent. In doing so, God’s Word prohibits us from pretending single moms don’t have more pressure, stress, and responsibility. They do! They do double duty by shouldering the responsibilities of both mother and father!

Where, then, might there be help in providing a male role model? Here are some suggestions:

Don’t overlook the fact that boys often find their own male role models: a teacher, a coach, a pastor, a scout leader—even a good friend. But at the same time, be careful. We live in a fallen world where predators are lurking. Expect organizations to complete background checks on their employees and volunteers.

The key term to keep in mind is family, whether extended, congregation, neighborhood, or community. Make family as large as it needs to be for your child.