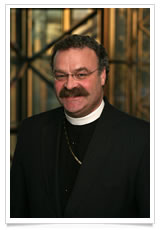 The Lutheran Reformation had been in full swing for nearly six years, but Martin Luther had yet to write his first hymn. A profound event moved his poetic and musical soul. Within a short period following, most of the hymns and liturgies he produced during his lifetime would gush forth in a flood of firm conviction and deep faith in Christ. What was the event?

Two young men, Augustinian brothers like Luther, were burned at the stake in Brussels on July 1, 1523 for preaching the Gospel of free forgiveness in Christ. They were the first “martyrs” of the Lutheran Reformation. Luther wrote a hymn in the popular ballad form of the day, used by the town criers of his day to deliver the latest news from village to village. Luther’s ballad spread the news of these martyrs’ deaths, as well as the precious Gospel for which they died.

The first right fitly John was named,
So rich he in God’s favor;
His brother, Henry—one unblamed,
Whose salt lost not its savor.
From this world they are gone away,
The diadem they’ve gained;
Honest, like God’s good children, they
For his word life disdained,
And have become his martyrs (Luther’s Works, 53:214).

The familiar term martyr comes from a Greek New Testament word often translated “witness.” In its simplest (legal) use, a witness is merely one who recounts the facts observed (Matt. 18:16). Thus, it was crucial for the place of Judas among the Twelve to be filled with “a witness of the resurrection” (Acts 1:22), since the apostolic band was told by the risen Christ, “You shall be my witnesses . . . to the ends of the earth” (Acts 1:8). John’s Gospel and letters show a particular interest in such “bearing witness” (martyria)—an understandable fact since John was writing late in the first century as the eyewitnesses to the events surrounding Jesus were quickly passing into eternity.

Of John the Baptizer, the text says, “And there came a man sent from God by the name of John. This one came as a witness (martyrian) . . . that all might believe through him” (John 1:7). The text of John 1 is worth a careful read. What is John’s testimony of Jesus? “This is the witness (martyria) of John . . . He confessed and did not deny, and he confessed, ‘I am not the Christ’” (John 1:19–20). John called for repentance (John 1:23) and then pointed to Jesus with a witness so profound it has been repeated in the liturgy of the Church since at least the seventh century: “Behold, the Lamb of God who takes away the sin of the world” (John 1:29). Finally, like Jesus, John the Baptizer sealed that witness with his own blood. How many faithful Christians have been safely guided to Jesus by John’s witness? Countless millions.

The greatest witness, however, is not John, but Jesus Himself. Paul bids Timothy to “fight the good fight of faith, take hold of the eternal life for which you were called when you confessed the good confession before many witnesses.” For, as Paul continues, “Jesus Christ Himself bore witness to Pontius Pilate in the good confession” (1 Tim. 6:12, 13).

Today the fundamental gift and task of the Lutheran Church is to bear witness to Jesus Christ—to His Gospel and all its facets (AC VII 2; FC EP X 7). This is our task toward each other. This is our task over against those who do not know Jesus. This is also the sacred vocation and ecumenical task of the Missouri Synod to world Christianity. We exist to bear witness—even to the point of suffering and death (and it may well come to that sooner than later here in the West)—to salvation by grace alone, through faith alone, on account of Christ alone. This Gospel is God’s own testimony about Himself. This is the very confession of Christ Himself. This is the witness of the apostolic Church and the Church of all ages. This is the witness sealed by the blood of Jesus, the blood of John the Baptizer, and the burning of John and Henry, confessed and sung by Luther.

“Therefore, since we are surrounded by so great a cloud of witnesses [such as Brothers John and Henry, Luther, John the Baptist, and especially Christ] . . . let us run with endurance the race that is set before us . . .” (Heb. 12:1).