Some 25,000 youth and adult paid participants from all 35 LCMS districts and several nations, along with 1,500 volunteers, met in Orlando at the Orange County Convention Center July 28–Aug. 1 under the theme “CHOSEN,” based on 1 Peter 2:9. The 2007 event marks the 10th triennial National Youth Gathering sponsored since 1980 by LCMS District and Congregational Services—Youth Ministry.

“You are all chosen. You are also the church at its best,” Rev. Terry Dittmer, director of LCMS Youth Ministry, told participants at the close of the event. “You are the church with a smile on  its face and the joy of Jesus in [its] heart; and it’s time to go back out into the world and tell the world what we know about being chosen in the name of the Chosen One.”

LCMS President Gerald B. Kieschnick addressed all the participants at the Sunday evening plenary session. “The focus of these National LCMS Youth Gatherings is on your relationship with the God of the universe,” Kieschnick said to them. A number of teens expressed their delight in meeting with so many others from across the country—Christian Lutherans “just like me all here in one place.” 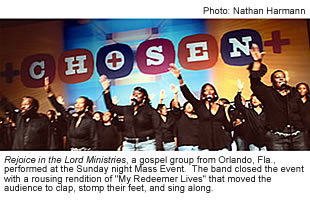 The Gathering included daily general sessions for all participants, workshops, fellowship, and service projects. Service projects included 7,500 participants serving 39 elementary schools, 17 parks and community-based senior centers, and nine private facilities throughout the greater Orlando area. At the Orange County Convention Center, eight sheds and 250 door or window headers were constructed with Thrivent Builds! and Habitat for Humanity. Key verses were highlighted in 3,500 Bibles to be distributed throughout the Florida penal system, and 2,500 fleece blankets for hurricane-impacted families of the Southern District were assembled; 64 pints of blood were donated; 4,000 pounds of food were collected and sorted for the Second Harvest Food Bank of Central Florida; and 10,000 pairs of eyeglasses were donated, washed, inspected, calibrated, sorted, and packaged for the needy in Nicaragua.

“The service was awesome,” Mulder said, “but something the youth knew impressed me the most—25,000 very excited youth would go from thunderous applause to reverent response to a portion of the liturgy in a matter of seconds. And during Tuesday’s extremely well-crafted message by Dr. (Reed) Lessing, they were as quiet as church mice when they heard the Law but applauded at the first and repeated Gospel statements. Thank God for the faithful pastors who have taught their youth how to worship and how to distinguish Law and Gospel.”

Planning is under way for the 2010 National LCMS Youth Gathering. The event’s location will be announced in the coming months as contract negotiations are completed. Watch for more details at www.lcmsgathering.com.