Donors to the LCMS Fan into Flame campaign have designated major gifts toward the construction of a new seminary campus on 30 acres of prime land northeast of Accra, Ghana. The earmarked funds contributed to date are being distributed. The Schwan Foundation, LCMS World Mission, LCMS World Relief and Human Care, and donors to Fan into Flame are sharing the project cost of nearly $1 million.

The campus will be completed in phases, with parts of the academic and residence complex to be completed first. When complete, the campus will have an administration building; three multiuse classrooms; a library, dining hall, and kitchen; three student dormitories; and two staff homes. The architect and project manager is MSAADA of Minneapolis, Minn., a firm with international offices and extensive construction experience.

The completed campus will accommodate 120 students.

When one considers that the current facilities can accommodate only 17 seminary students, the future for growth in Gospel proclamation in the Lutheran Church of Ghana and the whole of English-speaking West Africa is clear.

While major gifts have been received, more than 40 percent of the cost remains to be raised through Fan into Flame, the financial arm of the Synod’s Ablaze! movement. Donors are encouraged to join the partnership already in place. 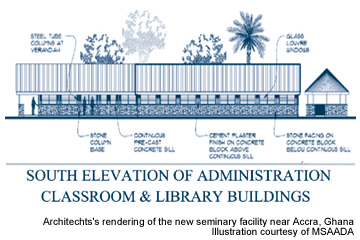 Already involved in a number of special projects, working toward planting a new mission, and living with an overflowing calendar, Redeemer, Fredericksburg, Va., had every reason to put out the flames of Ablaze!

Instead, the congregation chose to move forward with a simple appeal and identified a team of six people who prepared and bathed the appeal in prayer. Three cottage meetings and a gathering for youth followed the spiritual preparation. Rev. Fred Klein of Living Savior, Fairfax Station, was invited to direct the cottage meetings and share the Ablaze! vision.

The congregation was led to a generous response totaling $153,540, or 300 percent of its goal. The congregation’s share of the funds will support regional, national, and international missions, as well as continue support of current outreach ministries at Redeemer.

Ablaze! for God’s Mission, in partnership with Fan into Flame, is a movement to inspire individuals and congregations in the Southeastern District to respond as recipients of God’s abundant grace through the sharing of resources in the work of mission.

Fan into Flame is the national campaign in support of the Ablaze! vision of LCMS World Mission and its partners to share the Gospel with 100 million unreached or uncommitted people globally by 2017. The campaign, approved by the 2004 LCMS convention (Res. 1–04), supports outreach activities of Ablaze! and seeks gifts of $100 million by 2010.

Fan into Flame unrestricted funds are distributed quarterly based on an Acts 1:8 model: “You will be my witnesses in Jerusalem … Judea and Samaria, and to the ends of the earth.” Of the net proceeds, distributions consist of: