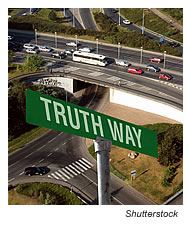 Those are strong words. The Bible says that Jesus Christ will be a “stone of stumbling and a rock of offense” (Rom. 9:33). Today, especially, people stumble over and find deeply offensive the Christian teaching that “there is salvation in no one else, for there is no other name under heaven given among men by which we must be saved” (Acts 4:12).

We live in a pluralistic culture. Our neighbors, co-workers, and friends come from many different religious backgrounds. They seem just as moral and religious as we are, if not more so. It seems the height of arrogance to think that we Christians alone have the right religion and that everyone else is lost forever.

We also live in a climate of relativism. Because of our pluralism and the dominating worldview of postmodernism, people tend to assume that truth, morality, and religion are relative. According to this way of thinking, cultures and individuals construct ways of thinking and acting that give meaning to their lives, but meaning is strictly subjective. There is no objective truth—with perhaps the exception of scientifically determined facts—that is valid for everyone.

“That may be true for you,” we hear, “but it isn’t true for me.” Truth is seen not as a discovery but as aconstruction. Morality is a matter of “values”—that is, behavior that particular individuals or cultures value—rather than a matter of transcendent objective absolutes. Religion has to do with subjective choices and experiences that give meaning to a person’s life. Religion is perfectly acceptable—as long as it is kept private, experiential, and interior. But religious truth-claims, doctrines, and absolutes are out of line. Since religion is seen as purely personal, “no one has the right to impose his or her religion on anyone else.”

This mindset is obviously a huge obstacle to Christian evangelism. The very claim that faith in Jesus Christ is the one way to salvation seems preposterous on its face. Even Christians often find that teaching hard to accept.

Part of the problem is the way the issue is framed, even in our own minds. We need to make clear to people we are witnessing to—and to ourselves—exactly why and how the Gospel is such radically “good news” to people of every culture and religion. This will involve clearing up some misconceptions.

Don’t all roads lead to the same destination? 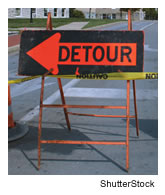 In John 14:6—one of the passages that causes so much trouble—Jesus says, “I am the Way.” Literally, that means, “I am the Road.” This is countered by the oft-heard assertion that all of the different religions are different ways to find God: “There are different roads, but they all arrive at the same destination.”

But different roads do not always go to the same destination. If you are trying to get to, say, the Grand Canyon, if you head north on I-35, you will never get there. It will not matter how sincere you are in your drive. I-35, though passing through many interesting parts of the country, just does not go to the Grand Canyon.

The very concept of “heaven,” referring to a realm of eternal life in which the individual person survives after death in a state of perfect joy, is a distinctly Christian belief. Supplemented with the belief in the resurrection of the body, the Christian teaching about the afterlife means that you yourself, in all of your personality and memories and relationships, will live forever, purged of all your sins and weaknesses, and that you will know your loved ones and be in communion with Christ Himself.

In contrast, most Eastern religions—such as Hinduism, Buddhism, and the Westernized New Age versions—reject the survival of individuals altogether. In Hinduism, souls are reincarnated into other individuals until they are purged of their distinctions and ultimately merge all together into a vast cosmic oneness. But, as C. S. Lewis pointed out, using one of Hinduism’s own metaphors, when a drop of water falls into the ocean, the individual drop ceases to exist.

The destination of Buddhism is “Nirvana,” meaning, literally, “nothingness.” When, after much meditation and reincarnation, the soul finally loses all of its desires and finds enlightenment, it will escape the bounds of the material world—the realm of things—and experience “the void” of “nothingness.”

In the classical pagan religions—and in other pagan religions today—all of the dead go to the same place. The ancient Greeks believed that all souls, good or bad, cross over into Hades, the word used in the Greek New Testament that is translated into English as “hell.” Here the desperately wicked are tormented, while the rest wander in melancholy darkness.

The ancient Germanic tribes had much the same belief, with the added notion that warriors would spend their eternity fighting every day, with their wounds healing each night, so they could fight again the next morning. The Germans’ name for the place of the dead was “Hel.”

In the days of the early church, Greek and Germanic pagans had no difficulty with the idea that everyone when they died went to hell. That was what they themselves already believed. When Christian missionaries taught them that, through Christ, they could enter into a realm of eternal joy, that was good news indeed.

Monotheistic religions often teach something similar to what Christians believe about the afterlife, but the similarity tends to be superficial. Mormons teach that when you die, you will get to be the god of your own solar system, begetting with your wife spirit children to be born as inhabitants of the planets you will rule. Muslims teach the existence of a paradise in which the inhabitants get to enjoy sensual pleasures, including those the religion forbids on earth. Some of the most orthodox of the Jewish sects believe in some kind of afterlife, along the lines of the hints in the Old Testament, but many Jews believe this life is final, with no survival beyond the grave.

Those who want to go to heaven would do well to embrace the religion that teaches that there is such a place and that, through Christ, offers a Way to get there.

Isn’t it unfair for God to condemn non-Christians?

But even so, it does not seem fair that God would condemn people to hell just because they do not know Jesus. Many people throughout the world have never heard of Jesus. It would be unjust for God to condemn them. And surely, whatever his religion teaches, a good, moral, saintly person who follows another religion should not go to hell, but should receive an eternal reward.

We, as well as the people we are witnessing to, need to realize that no one is condemned for not believing in Jesus. People are condemned for their sins.

At the end of time, the Bible tells us, everyone will be judged by their works.

And I saw the dead, great and small, standing before the throne, and books were opened. Another book was opened, which is the book of life. The dead were judged by what was written in the books, according to what they had done. . . . If anyone’s name was not found written in the book of life, he was thrown into the lake of fire. (Rev. 20:12, 15 NIV)

Everyone’s deeds are recorded in the books. It is on this basis that judgment comes. But there is “another book,” the book of life, which records the names of those saved by Christ (Phil. 4:3). They and they alone, through the work of Christ, can escape the punishment due to their sins.

It is, however, true that God would never condemn a good, moral, saintly person, someone with no faults and with abundant virtues. A person without sin has no need to fear God’s judgment. Christianity, though, is skeptical that there is anyone who is sinless, denying that there isanyone so virtuous as to deserve eternal life in heaven. “None is righteous, no, not one . . . . All have sinned and fall short of the glory of God” (Rom. 3:10, 23).

The Bible does teach that nonbelievers can demonstrate exemplary virtue (Rom. 2:12–16). We may indeed know of a holy man from another religion who exhibits the highest moral qualities. Again, if he actually is holy and moral and sinless, then he would have no need of Christ’s forgiveness. But, though we might see external signs of goodness, God sees also his heart. And, if you talk to the holy man, he himself may well admit to the sins and imperfections that rage in his inner life.

As for those who have never heard of Christ, they are not condemned for that omission, but for their sins. In Romans, which we have been citing, St. Paul explains that every human being has enough of an innate knowledge of God and of His moral law to render everyone “without excuse” (1:18–20).

We can be confident that God is fair. That is to say, He is just. And that is why we should all, if we are honest, tremble. But God, in His love, has satisfied His justice. By becoming incarnate in Jesus Christ and atoning for our sins on the cross, God offers us His grace. To those with faith in Jesus, God is not fair, giving us mercy rather than the punishment we deserve, and for that, we can only praise and obey Him.

Christianity is precisely for sinners. People who think they are righteous, whether through their own virtues or their religious observances, can never understand Christianity. They must be broken by God’s Law, made to realize how sinful they really are. While Christ, our Great Substitute, taught both Law and Gospel, He must not be presented as Law, in the sense of representing something else people have to do or face divine punishment. Rather, Christ is a lifeline, a means of rescue. He must always be proclaimed as Gospel, as Good News.

Aren’t all religions about just being good?

Though the world’s religions differ about what salvation is and what God is, they do tend to agree on the centrality of human merit. Somehow, we must do things—rituals, meditation, good works—to reap the spiritual benefits of that religion.

Christianity really is the only religion in which God, through Christ, does it all: He reveals Himself to us through His Word, forgives our transgressions, and empowers us to live as we should. Faith itself is His gift, which He creates in our hearts through His Word and Sacraments.

Belief in a religion of works, however construed, may be the “natural religion” so many people look for. Even ostensibly Christian theologies sometimes devolve into religions of works.

If religion just has to do with works, then all of the religions of the world really are pretty much the same. All religions can produce their holy men and women and examples of moral heroism. And Christians, since we too believe in the moral law, can appreciate them.

But for those who crave not just good works but forgiveness for bad works, for people who feel guilty for violating the tenets of their own religion, for those who feel that they merit condemnation, then Christ comes as a blessed relief.