Eleanor Pattie and her husband had been living in the Chicago suburb of Glenview about two years when she began looking at childcare resources for her infant daughter, Ula. Pattie became frustrated quickly, as there seemed to be waiting lists everywhere. 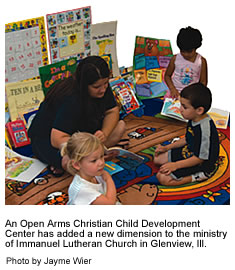 “I soon found out that in this area, you practically have to get on a waiting list when you first know you’re pregnant,” she says.

When Pattie began touring the few facilities with openings, she became discouraged by overcrowded and institutional conditions. “The kids were pretty packed in there,” she remembers. “I also noticed that most facilities were extremely regimented as far as eating, naps, and activities—probably due to the number of children enrolled. There was no individualized attention.”

In the fall of 2006, Pattie was driving past Immanuel Lutheran Church in Glenview when she noticed a large, colorful banner hanging on the church’s former school building. It read “Now Open: Open Arms Christian Child Development Center.” Several phone calls and tours later, the Patties decided Open Arms was the right place for their daughter. They became one of the first families to enroll a child in Immanuel’s new ministry.

Hard choices
For many years, it seemed that Immanuel was focused only on survival. Shifting demographics had led to a substantial decline in school enrollment and church membership. When the congregation called Rev. David Barber to be its pastor in 1999, the school—and by default, the church—was in financial crisis. In August 2003, the congregation voted to close the school.

“There was tremendous conflict over this decision,” Barber remembers. “The prevailing outlook was ‘If the school dies, the church dies.’ It was a very painful process.”

Faced with an empty but usable building on their property, Barber and church leaders examined potential ministries that could be housed by the 30,000-square-foot facility. Congregation president Tom Amato describes the process that began then as very organic. “We began asking ‘Who are we as a church?’ and ‘Who are we to serve?’” Amato says. Leaders carefully evaluated a United Way of Glenview survey that identified childcare as the most critical need in the community.

“Childcare began to make sense as a way to reach out to the community and let them know we can help,” Amato says.

“At that time, more two-career families with young children were moving into the area, and some of them were coming into the church,” Barber notes. “We started asking, ‘What can we do to make an impact on the lives of these families?’ Again, childcare fit into that calling.”

While pastor at Faith Lutheran in Merritt Island, Fla., Barber had visited the first Open Arms center in Alpharetta, Ga., a ministry of Ascension Lutheran Church in Atlanta. The success of Ascension’s childcare center resulted in a church plant.

“Open Arms is a church-planting strategy that starts out by connecting to the community through providing childcare services,” Barber notes. “In our case, we had the facility—we just needed a means of connecting with and serving the community.”

Amato and other church leaders believed the Open Arms center would be an effective ministry for Immanuel—and it was consistent with the goals of Synod’s Ablaze! movement.

“Open Arms will address the growing need for childcare among families in the Glenview area,” Amato says. “It will offer us the opportunity to reach segments of the community that we could otherwise not reach, especially families with no recent connection to a Christian church.”

They estimate that number at 15,000 households, Amato adds.

“The worst thing that can happen is for a congregation to turn inward,” observes Dr. Robert Scudieri, associate director of LCMS World Mission. “Starting an Open Arms ministry impels a congregation to consider the needs of the people in their community.”

But not everyone at Immanuel was excited about the idea. After Wendy Pritchard accepted the call to be Immanuel’s Open Arms director and moved her family from Florida to Illinois, she faced some obstacles. Even though she received an official congregational welcome, she encountered members who opposed the new ministry and weren’t afraid to tell her so. Less than a year later, she has seen a remarkable shift in attitude.

“The members who didn’t want the ministry at first have really come around and been helpful, positive, and supportive,” Pritchard says.

An Immanuel member for four years, congregational secretary Carla Wehrspann is excited about what the ministry could mean for the church and the community. She recently joined the Open Arms board.

“The biggest change is that everyone has really come together for a common purpose, whereas before we were all going in different directions,” Wehrspann says. “There used to be a sort of friction between the long-term members and newer members. I really feel like we’re all on the same path now.”

Barber partially credits the shift in member mindset to the physical transformation of the church.

“The renovations we did to open the childcare ministry showed members a sign of life they hadn’t seen in years,” he says. “This ministry has created positive momentum—especially as more children and families are coming to worship.”

“Just having kids and families around helps a congregation wake up and realize the outreach opportunities right at their door,” says Rev. Scott Snow, director of outreach with LCMS World Mission. “It’s hard for some congregations to go outside of themselves and reach into the community. An Open Arms ministry brings the community to the church.”

As a parent sending her child to Open Arms, Pattie feels that Immanuel’s selection of an outreach ministry was critical to the community. She appreciates being on the receiving end of the effort.

“The church involves the childcare families, sending them monthly newsletters and communicating on a regular basis,” she says.

Pattie notes that every child attending Immanuel’s Easter service received a basket, which included a tract on the story of Jesus and a brochure about Open Arms.

“The way they operate is a huge testimony to the church,” she says.

Barber and the Open Arms staff are thrilled to see the faith community grow healthier each day. Pritchard continually encourages member involvement, even including shut-in members whenever she can. “We’ve asked them to fold brochures, stuff mailings, and put stamps on envelopes; they’ve made food for work parties,” she says. “Although they are not here physically, they still feel like they are a contributing part of the church.”

Scudieri notes congregational involvement and a talented, devoted core of leaders are critical to the success of any Open Arms ministry. “A pastor can inspire the vision of the new ministry and share the Word of Christ that supports the ministry, but if the Word doesn’t take root in the heart of the people, it will not succeed,” he says.

“Starting up this ministry has been very rewarding—I don’t think I would have changed anything about the whole process,” notes Pritchard.

And the process wasn’t smooth. Permit and construction delays pushed the opening from fall 2006 to January 2007, a less-than-ideal time to take in children. Yet some parents were impressed enough with the church and the ministry that they pulled their children out of their current daycare arrangement to enroll them at Open Arms. Pattie even bypassed her employer’s less expensive on-site daycare.

“To us, it was worth an extra $5,000 a year to avoid crowded conditions and get Christian care,” Pattie says.

Soon after Glenview resident Katie Boling began looking for childcare for her infant son, she received an Open Arms mailing. “It seemed like it would be a good fit for us. After I met Wendy and took a tour of the facility in November, I knew it was.”

Boling was fortunate that her employer was flexible enough to postpone her return from maternity leave to accommodate her choice of childcare. She says it was definitely worth the wait.

“Even among the area’s ‘premier’ daycare options, Immanuel’s Open Arms is nicer—more of a family environment,” Boling notes. “The outdoor play equipment is unbelievable; there are activities for all the children, and the teachers are wonderful.”

Debra Zara, also a parent with a child enrolled in Open Arms, agrees. “The teachers are very open and friendly—they truly love those kids. I give Wendy a lot of credit for that. She has an incredible gift to recognize positive strengths in people.”

“This is exactly the kind of ministry we had hoped Open Arms could be,” Scudieri says.

Amato believes Open Arms has the potential to maintain the momentum created by Ablaze!  “Open Arms will allow members of the Immanuel community abundant opportunities to demonstrate meaningful Christian witness to the families we reach and the community at large.”

Interest in the ministry continues to grow. Pritchard fields inquiries every day and expects the trend to continue, driven in part by word-of-mouth recommendations. “Parents are hearing about the school from other parents—it’s a really neat trend,” she says.

Zara, now a member of the Open Arms board, is excited about what the ministry means for the congregation and the community.

“We’ve done this together as a congregation,” she says. “We’ve come a long way as far as getting more of our members involved and getting new people involved. We’ve built a good foundation for reaching out to families.”

Open Arms
Reaching out with the Gospel

The goal of the Open Arms Institute is simple: to encourage quality Lutheran childcare ministry in connection with new church planting or expanded Gospel outreach.

“Open Arms is not just a childcare service, but an intentionally Christian Lutheran Gospel ministry,” says Dr. Robert Scudieri, associate director of LCMS World Mission. He adds that the Open Arms strategy can be successful in supporting the start of a new church, allowing existing churches to begin a satellite church, and, as in the case of Immanuel Lutheran in Glenview, Ill., revitalizing an existing congregation. But it needs to be an informed decision.

“A congregation considering Open Arms needs to conduct a market survey, develop a thorough business plan, and put together an informed budget in order to apply for an LCEF loan,” Scudieri says. “But most of all, the congregation needs to pray and seek guidance of the Spirit. If you don’t have that, the rest won’t fall into place.”

To learn more about the Open Arms Institute, visit www.openarmsinstitute.com or call 970-667-3249.

Top Five Open Arms recommendations for congregations:
5. Understand the demographic makeup of your community—the true market-driven needs for childcare.
4. View the facility, staffing, and program through the community’s eyes.
3. Communicate, communicate, and communicate (with the congregation).
2. Encourage the use of members’ God-given (spiritual) gifts.
1. Keep ministry the focus at all times.