War is hell, and no one can speak to it more articulately than a military chaplain who sees life and death through the lens of God’s love and eternal protection in Jesus Christ.

Peacetime, too, can be a lesser hell for men and women serving in faraway lands or on distant seas, in dangerous skies, or even in another part of this country. Wherever he or she serves, a soldier is still a long way from home, from family, and from a Christian congregation.

The Lutheran Church—Missouri Synod has a proud heritage of providing Christian witness and nurture to the soldiers and sailors who serve their country in war and peace. It’s a tradition almost as old as the Synod, dating to the first chaplain, Rev. Friedrich Wilhelm Richmann, who ministered with the 58th Regiment of the Ohio Volunteers during the Civil War.

Appropriately, during this time of the war on terrorism, the ministry of LCMS military chaplains is documented in an exhibit at the Concordia Historical Institute (CHI), the archive of the Synod and U.S. Lutheranism. Opened in the fall of 2006, the exhibit is at the CHI building on the campus of Concordia Seminary in St. Louis and continues through the end of 2008.

“It was a blessing to us to work with a department of the Synod,” Noland says. “We contributed our knowledge; our staff did the research.” 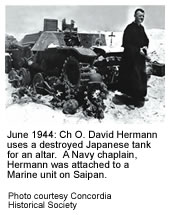 The intent of the exhibit is to highlight the often difficult and arduous ministry provided by military chaplains, Schreiber explains. “We supplied documents and insights, while trying to represent the different services and ranks.”

Among the holdings at CHI was the war diary of Richmann—“one of our treasures,” says Noland—plus items from eras of American history. To fill out the exhibit, CHI and the Ministry to the Armed Forces contacted active and retired chaplains for their help. The result was an abundance of material, as chaplains contributed or lent pictures, uniforms, medals, field kits, and other items. Schreiber was even spurred to complete a model of an aircraft carrier on which he served so it could be part of the exhibit.

“[Our chaplains have] touched people in unusual ways,” Noland observes. “Chaplaincy is a mission opportunity for the Lutheran Church, and we have been able to make a significant contribution.”

One example: the ministry of Ch Henry F. Gerecke, who served as chaplain to Germans who were tried for war crimes at Nuremberg after World War II. Gerecke spoke German, and 15 of the 21 prisoners indicated a Protestant background. Excerpts of Gerecke’s journals, on exhibit at CHI, tell of his regular rounds to the prisoners, of writing letters to their families, and accompanying them to their executions.

Another chaplain, Oscar Schoech, served from 1948 to 1950 among Japanese prisoners. He also had the duty of accompanying them, including two Christians, to their executions.

Chaplains are not directly assigned to combat, but their commitment to minister to “their men” often exposes them to danger. Ch Roger W. Heinz was killed in action in 1969. Others were wounded in action or cited for bravery.

Even in peacetime, chaplains can face rigorous duty. Ch Alfred R. Saeger served in Antarctica during 1957 and 1958. A photo in the CHI exhibit shows Ch Milton S. Ernst-meyer being lowered on a sling from a military helicopter to conduct services on a submarine at sea.

A number of well-known LCMS leaders served as chaplains. Dr. John W. Behnken, LCMS president from 1935 to 1962, and Dr. Walter A. Maier, Lutheran Hour speaker from 1930 to 1949, served as base chaplains early in their careers.

Arthur Carl Piepkorn, Martin Scharlemann, and Richard Klann served as chaplains before their service as professors at Concordia Seminary, St. Louis. Dr. Gerhardt W. Hyatt became a of Major General and Army Chief of Chaplains during his service from 1945 to 1975, and in retirement headed the Synod’s Forward in Remembrance campaign, served as president of Concordia College, St. Paul, and as a Synod vice president from 1981 to 1985.

Former chaplains have served in executive staff positions with the Synod, as executive editor of The Lutheran Witness, as seminary professors, and district presidents. Just as important, many are serving, or have served, as parish pastors.

“LCMS clergy are highly regarded in the chaplaincy,” says Noland. “They understand discipline, respect separation of church and state, and are well-educated.”

The CHI exhibit includes information about Lutheran Service Centers, which were sponsored jointly by the National Lutheran Council Service Commission and the LCMS Army-Navy Commission. During World War II and the Korean War, they served as a “Lutheran USO.” Staffed by volunteers, the centers provided a place for servicemen and -women to gather for worship and recreation. They’re of special interest to Noland because his father, a Navy serviceman during the Korean War, met his mother, a volunteer, at a center in San Francisco.

According to current plans, a new CHI museum will open in fall 2008 at the LCMS International Center in Kirkwood, Mo. CHI will continue to offer special exhibits at its current building. The changes will also allow more archival space in the current building.

•  About LCMS Ministry to the Armed Forces, visit www.lcmsworldmission.org/armedforces or contact the office at 1333, S. Kirkwood Road, St. Louis, MO 63122.

Ministry to the Armed Forces relies on Lutherans and their congregations to supply names and addresses of members in the military. Nancy Rowley, assistant to the MAF director, manages the “Ministry by Mail” program, which first sends devotional material and a Luther medallion for soldiers’ dog tags. Then quarterly mailings provide Portals of Prayer and the “So Help Me God” newsletter, edited by Ch Ted Wuerffel, MAF assistant director.

Send the address of your family member or congregation members who are on active duty to “Ministry by Mail,” 1333 S. Kirkwood Road, St. Louis, MO 63122.

Professional counselor, staff officer, and headache-reliever for the commanding officer.” Those are just a few ways Dr. Mark Schreiber describes a military chaplain. Add to that advisor on marriage and children, comforter of the lonely and fearful, baptizer, worship leader, and conveyer of God’s love in Jesus Christ. 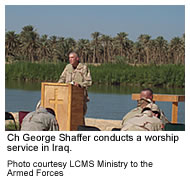 “As ordained pastors, chaplains conduct worship wherever they can pull people together—on the backs of trucks, fantails of ships, in the air,” says Schreiber, a retired Navy chaplain and director of the LCMS Ministry to the Armed Forces (MAF). “But they also wear a second hat, as a trained staff officer to the commanding officer. They are a big resource and relied upon for professional advice.”

The Synod has 231 endorsed chaplains, including 75 full-time in the Army, Navy, and Air Force, plus 105 Reserve chaplains (15 now on active duty). Others serve in Veterans Administration hospitals, the Civil Air Patrol, and the Bureau of Federal Prisons.

By Department of Defense requirement, today’s chaplains must have two years of parish experience before entering the military.

“The chaplain is a pastor,” Schreiber emphasizes. “We seek to recruit, train, and support the best pastors to be chaplains.” The DOD also has physical and age requirements.

All chaplain candidates must receive MAF endorsement. The process includes evaluations from their district president, circuit counselor, and three other pastors. The Commission on Ministry to the Armed Forces interviews all candidates and endorses them for service. Once accepted, they choose a military branch and begin active or reserve duty as positions become available.

Chaplains receive basic training according to the branch they will serve. Upon entering the military, they could be in a combat zone within 12 months. 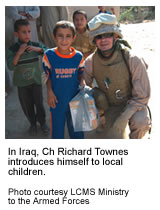 “Pray for our chaplains, asking God to provide them with the courage and strength to serve in a just and noble way,” Schreiber requests. “Combat can change perspectives—ugly things happen. Everyone has stress in a combat zone. The ministry of the Gospel to our men and women in uniform is the chaplain’s number-one priority. Pray that our chaplains stay focused on this priority as they seek to penetrate the military environment with the Gospel of our Lord and Savior, Christ Jesus.”

Schreiber emphasizes that prayers for chaplains—and the soldiers they serve—need to continue beyond combat tours. “Life doesn’t simply return to normal once their tour is done,” he says.

The LCMS and the Evangelical Lutheran Church in America (ELCA) are developing a support system for chaplains and veterans, Schreiber says. The goal is a nationwide system of counselors—people who also experienced war—to ease re-entry to civilian life and to readjust to marriage, family, congregations, and civilian ministry.

“Prayer is always important, but it must be united with proactive ministry,” Schreiber adds.