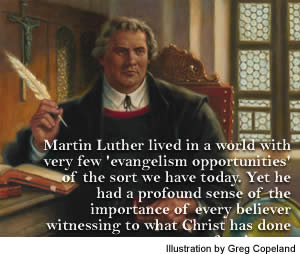 We live on earth only so that we should be a help to other people.  . . . For this reason God lets us live, that we may bring other people to faith as He has done for us.”

Martin Luther was preaching on 1 Peter 2:9 in 1523 when he told this to the Wittenberg congregation. “One brother proclaims to the other the mighty deed of God: how through Him you have been redeemed from sin, hell, death, and from all misery, and have been called to eternal life. You should also instruct people how they should come to that light.”

Luther lived in a world with very few “evangelism opportunities” of the sort we in the 21st century have. He met, at most, a couple dozen unbaptized people in his entire life. Nonetheless, he had a profound sense of the importance of every believer’s witnessing to what Christ has done for sinners. He believed that Baptism produces newborn children of God who imitate their heavenly Father by proclaiming God’s call to all people to come into Christ’s marvelous light. Luther’s task was to bring the Gospel to people who were in the church, some of them “inactive,” many of them quite active in producing works they thought would merit salvation. Luther’s challenge was to help those Christians understand the nature of the Gospel and to assist all believers in giving witness to that Gospel within the church.

Luther’s witness spread quickly through northern and eastern Europe, and even beyond, because those in his circle made use of a technological advance scarcely a half century old—moveable type for printing—and because students came to hear and absorb his teaching from various parts of the European world. His witness traveled to all corners of Germany through tracts and treatises in German. Merchants from northern German towns took his Latin and German writings to marketplaces around the Baltic coast, sharing them with contacts in towns from England to Estonia. Some were translated into local languages, and all were summarized and retold in local markets and inns. God sent His proclamation of forgiveness and life in Christ through Luther’s hand onto paper, into print, and across borders political, linguistic, and cultural.

The Holy Spirit also sent students from Norway, Denmark, Sweden, and Finland; from what is today Estonia and Latvia; from the kingdoms of Hungary and Poland; as well as Slovaks, Bohemians, and others to Wittenberg to learn the faith from Luther’s exposition of Scripture. Robert Barnes came from England to hear Luther’s lectures and sermons; then Barnes returned to his native land—and to martyrdom at the order of King Henry VIII. Luther thanked God for giving Barnes the gift of witnessing of Christ through his own death as he wrote a preface for his student’s confession of faith. Luther acknowledged that martyrs had always brought others to that faith. In a sermon on Is. 60:4, he reminded readers that “by persecution Christians were chased into the whole world, and the Gospel spread out so that in every locality the sons and daughters of Jerusalem were gathered into this light.” 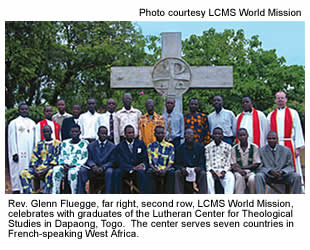 God’s mission fell upon the man from Wittenberg, and this man on God’s mission broadcast the message of the Lord’s death and resurrection to people caught in beliefs and practices that mixed the rhythms of pagan religions of the distant past with biblical words and figures. He sparked what Luther scholar Scott Hendrix calls the “recultivation of Christ’s vineyard” across much of Europe and beyond.

Luther did so, not only by writing about Christ’s resurrection victory over sin, death, and the devil, not only by preparing students to preach of Jesus’ self-sacrificial death, but also by exhorting those who heard his sermons to give witness to their faith. On occasion, his letters conveyed suggestions on witnessing to Jewish neighbors who showed interest in the message of Christ. Writing on the Turkish threat—in Luther’s day, the powerful Islamic Ottoman Empire loomed large over the Christian kingdoms of central and southern Europe—Luther also counseled how those who fell prisoner to Turkish forces should tell their captors of Christ’s sacrifice for them.

Such situations were among the few possibilities for Luther’s contemporaries to witness to non-Christians, but Luther urged continual testimony in conversation with Christian family and neighbors. In treating 1 Peter 2:9 in his 1523 sermons on the epistle, he reminded hearers that the “royal priesthood” of which Peter spoke meant that they were personally to proclaim God’s wonderful deeds that had brought them out of darkness into the light and delivered them from their sins and all the evils that threatened them.

“You should also teach other people how they, too, come into such light,” Luther said. “For you must bend every effort to realize what God has done for you. Then let it be your chief work to proclaim this publicly and to call everyone into the light into which you have been called.”

Nearly 15 years later, preaching on Matt. 18:15–20, Luther told the Wittenberg congregation that “God pours out [His forgiveness] even more richly and places the forgiveness of sins for [His people] in every corner, so that they not only find the forgiveness of sins in the congregation but also at home in their houses, in the fields and gardens, wherever one of them comes to another in search of comfort and deliverance. It shall be at my disposal when I am troubled and sorry, in tribulation and vulnerable, when I need something, at whatever hour and time it may be. There is not always a sermon being given publicly in the church, so when my brother or neighbor comes to me, I am to lay my troubles before my neighbor and ask for comfort. . . . Again I should comfort others, and say, ‘Dear friend, dear brother, why don’t you lay aside your burdens. It is certainly not God’s will that you experience this suffering. God had His Son die for you so that you do not sorrow but rejoice.’” 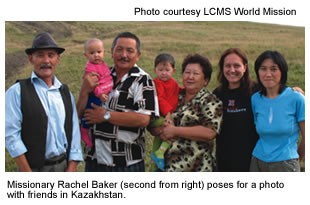 Luther dedicated much energy to bringing God’s saving Word to the German people in their own language. He translated Scripture anew into the German language so that all who were literate could read—and the illiterate could hear the Gospel and immediately understand it. He did more than just supply the Bible and other texts in their language, however. James Nestingen has noted that Luther’s catechisms provided a cultural translation of the biblical message into the way in which Germans of his time thought and conceived of the world around them. He rendered the ancient rudiments of the faith, the Ten Commandments, the Creed, and the Lord’s Prayer, into the terms of the daily life of his own time.

Luther’s world was not conducive to promoting individual participation in the mission on which God sends His people outside of Christian Europe. German and Scandinavian Lutheran princes in the 16th century did not send out colonizing expeditions of the sort Roman Catholic rulers did, which brought missionaries to other lands. Nonetheless, Luther recognized that God was still reaching unreached peoples in his own day. In 1522, he reminded the Wittenberg hearers that Mark 16:15 speaks of the Gospel going into all the world and that this process was still being completed, as “many islands that have been found in our time that are inhabited by heathen” were being discovered by Europeans like Luther’s older contemporary, Christopher Columbus. Just as a stone causes waves to spread throughout a pond, so the preaching of the apostles was continuing to be spread through the entire world, until the Last Day, Luther declared to his hearers.

An effective framework
Does Luther’s way of thinking assist us five centuries later in riding the waves of the Gospel into the lives of those outside the faith in our time and place? It does, indeed.

Luther’s distinction of Law and Gospel provides an effective framework for recognizing that our witness does not simply spout Bible truths into the air. We listen carefully to diagnose where individuals whom the Spirit places in our path are feeling the absence of God’s presence and love in their lives. Because Luther knew that the root problem of our endangering or harming the lives of our neighbors, or failing to help and support them in all of life’s needs, lies in our failure to fear and love God, his proclamation of the Law caught both perpetrators and victims of evil with its crushing power. For victims as well as perpetrators stand in need of the Lord whose absence they experience when they fail to trust God above all His creatures.

This enabled Luther to deliver God’s message of salvation and life in Christ by telling what He has done for sinners in the wide spectrum of biblical ways to say, “Your sins are forgiven, and your faith has saved you.” He could speak of Christ purchasing the guilty from their sins, not with a ransom of gold or silver but instead by sacrificing His life. He could also talk about Christ’s routing the tyrants and jailers of sin, death, the devil, and all evils, and snatching “us poor lost creatures from the jaws of hell, winning us, liberating us, and restoring us to the Father’s favor and grace” (Large Catechism, Creed, Second Article).

Luther also reminded those who witness to Christ that the Gospel is the power of God for salvation (Rom. 1:17) and that the proclamation of the forgiveness of sins is not merely a pointing in the direction of a distant heavenly reality. Gospel proclamation does more than talk about God’s merciful, loving disposition toward sinners and His intention to call them to life in Christ. Believers wield God’s instrument for conveying new life, His weapon against our sins and the evil in our lives, when they speak of Christ and assure others of His self-sacrificing love for them. God accomplishes His saving purposes through our witness when we bring the pronouncement of God’s favor to those who live outside faith in Christ.

Living in a nominally Christian world, without the kind of challenges that confront 21st-century believers as they bring Christ’s salvation to those totally outside the church, Luther recognized and understood the same dynamic in God’s Word, however, that serves us today as we speak the reality of rescue and liberation from sin and death to others. His way of thinking provides believers of the 21st century valuable tools for spreading God’s kingdom and bringing life and salvation to the nations and neighbors within our reach.