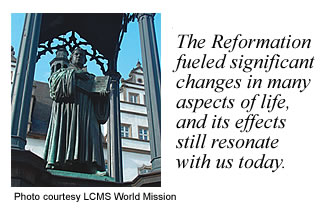 Listening from the distance of centuries across the death chasms and howling kingdoms of decay, it is not easy to catch everything,” historian Thomas Carlyle once wrote. We talk of 20/20 hindsight as though it offers perfect vision, but truth be told, retrospection is tricky business, even with half a millennium to offer perspective on the impact of Luther’s Reformation.

At the time, in the early 16th century, Rome initially dismissed the flap over the indulgence sales as just another monkish squabble. Even after the debate heated up, and the once-obscure Augustinian found himself declaring to the emperor that he could not go against Scripture with his conscience bound to the Word of God, most observers thought they had seen the last of Martin Luther. Even Luther thought so.

Far from it! Centuries later, Lord Acton, a Roman Catholic historian, termed Luther’s stand at Worms the hinge of history, a moment when the world turned toward the modern age.

That monkish squabble begun in little Wittenberg contributed immense energy that fueled a significant change in many aspects of life. Complex, long-ranging effects would eventually mark politics, the arts, economics, and social relationships. Books on such change are legion. But several points are of particular interest to us.

Vocation
Behind Luther’s entry into the cloister lay the medieval notion that some vocations—priest, bishop, monk, nun—were sacred and so gained eternal merit. Luther razed the sacred-secular wall, emphasizing instead that believers in all walks of life please God. God works through all people, unbelievers included, to achieve His purposes. As believers take up even the most mundane tasks, they lead lives of thanks and praise. Rather than obsess on so-called special or sacred works, Christians serve by being faithful in pursuing whatever God puts into their lives. Vocation looms large in Luther’s thought.

The Reformation also deeply affected family life. Exercising Christian love and faithfulness began, not in the artificially created cloister, but in the home, as the family formed the foundation for larger social relations. The medieval ideal held up the pilgrim moving resolutely onward, eyes fixed ahead, intentionally ignoring the world around lest it distract or lead astray. Now family underscored the importance of vocation in the world, living out Luther’s bifocal outlook: one eye was cocked heavenward, expecting the Lord’s return, while the other took in the world around.

That healthy split looked for Christ to come while also seeing Christ in the face of those served, no matter how ordinary they seem. Our eternal hope is pinned on God Incarnate, the focus of the Second Article. Knowing and believing this, life then opens up in the First Article, serving as God’s hands. We have this faith-life perspective because of the Spirit’s calling and keeping, the Third Article. With a foundation as old as the Creed, Luther’s Reformation radically recast the Christian take on life, marked by joy and a sense of purpose.

Education
Education felt the deep effect of the Reformation. Painting with a broad brush, formal learning had been geared toward professional service in the church. Beyond that, when the traditional pedagogical method used dialectic and syllogisms in theology, the results proved to be more eisegesis than exegesis. That is, more reading into the text than drawing ideas out. So, for example, it was reasonable to conclude that if God gives Law, there must be some way (aided by grace?) to keep the Law for salvation. Luther came to see things differently. Not because of our efforts but rather in spite of them and despite our sinfulness, God loves us and so sent His Son.

That was not something Luther dreamed up.  He got it by using tools from a Renaissance revival of the liberal arts, from a cultural movement called Humanism (not to be confused with Bertrand Russell and Secular Humanism).

Humanism’s emphasis on languages and text study prompted Luther to move from the old methods to look instead at what the biblical texts actually said, at the grammar and the message. Then Luther made God speak German, so to speak, letting the people read this for themselves in the German Bible. The Reformation understood the debt it owed to this New Learning, as it was called.

Wittenberg, along with Lutheran schools in its wake, became a hotbed for the new approach, not only producing evangelical theology but also equipping students to engage life and to tackle tough issues.

For example, when others hesitated to support Copernicus, the Polish astronomer, two Wittenberg mathematicians published the hard data, proving the case for putting the sun at the center of the solar system. Several years before Copernicus published, Luther knew the grapevine talk and dismissed the theory in an offhand table-talk remark. But when the facts were laid out, Luther and others did not balk.

‘For you’
Behind all of this lies the biggest impact of Luther’s reform: the biblical view of salvation. That God saves us, not because of us, but in spite of us, with His love embodied in Christ Jesus, turned the world upside down. We are sinners. Nevertheless (what a wonderful Lutheran word, a biblical word!) Christ died and rose for each of us.

It is all but impossible to wrap one’s mind and heart around this. Luther knew the mental gymnastics would tie us in knots, so in an age that looked for a link to God in the extraordinary and extreme—claims of relics, visions, pilgrimages, and more—Luther pointed to the simple yet profound right in front of our eyes: to a cross, to water, and to bread and wine. Unspectacular? Yes, but there also is God’s promise “for you” ringing in our ears.

‘By faith’
From that monkish squabble sprang much with both an immediate, as well as an indirect, impact on our lives. Luther was no Johnny-one-note, and the Reformation hardly sang in a monotone. Many a chord resounded through various aspects of life. But a cantus firmus sustained it all: “the just shall live by faith.” They live not only someday in the world to come but now.

We often quote Eph. 2:8–9, “By grace you are saved,” and it is so. Luther’s reform revolved around the Gospel truth. But do not forget verse 10: “We are God’s workmanship, created in Christ Jesus to do good works, which God prepared in advance for us to do” (NIV). Here is not the pilgrim passing through, engaged as little as possible. Rather, here we are, people redeemed and waiting for Christ’s return, but in the meantime we live in the only place and in every place God puts us. Luther’s Reformation impacts us still.