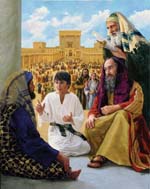 Epiphany has a remarkable “epiphanizing” splendor all of its own. Actually, it has more than one splendor. It has splendors Like a brilliant diamond with many facets, each facet of Epiphany has its own unique splendor, and, like a diamond crafted with all its facets, it is a jewel of radiant beauty.

Scripture readings appointed for the Epiphany Season of 2007, together with other Epiphany readings, show us these facets of the festival day and the Sundays that follow. These readings manifest glorious truths about Jesus whose birthday we celebrated at Christmas. And by God’s power, the Good News of God actually “epiphanizes” us.

God emboldens our faith and sets our lives ablaze to be what Christ called us to be: the light of a dark world, His people who “epiphanize” the lives of other people, and revelations to them of Jesus’ saving manifestations.

Origins of Epiphany
Epiphany is both a day and a season on the church calendar. The day is January 6; the season is the time between the close of the Christmas celebration and the beginning of Lent.

The word epiphany has a variety of meanings intimately related to one another. Epiphany means the shining of a light, a shining forth, a manifestation, an appearance, or a revelation.

The Day of the Epiphany, with Easter and Pentecost, is one of the three oldest and most important festivals observed by Christians. This is true even though today the festival seems to be little understood and under-celebrated.

The Festival of the Epiphany apparently had its origin in the east at the beginning of the third century. By the end of the third century, January 6 had become the accepted date for the celebration of the festival. In those days, Epiphany Day commemorated the birth of Jesus, His Baptism, and His first miracle at Cana in Galilee. At the outset, it was a splendorous, multifaceted commemoration.

In the middle of the fourth century, the Western Church moved the celebration of Christmas as the birthday of Jesus to December 25. So the Epiphany festival took on new meaning for the western, and many eastern, churches. In the west, the visit of the Wise Men came to have the position of prominence on Epiphany day, and, in time, other events of the day were assigned to the Sundays of the Epiphany season.

Today, for example, we commemorate the baptism of Jesus on the First Sunday after the Epiphany.

Season of Light
Epiphany is a day and season of light, just as the word “epiphany” denotes. Every year on the feast day, we hear the words of the Old Testament prophet Isaiah, “Arise, shine for your light has come and the glory of the Lord has risen upon you” (Is. 60:1).

Epiphany enlightens us as it proclaims great Scriptural truths. The time of celebration emphatically declares that Jesus, who was born at Bethlehem, is true God made man. It announces that God has appeared among us as the Promised One to be the Savior of all people of every nation, Gentiles as well as Jews. At Christmas we emphasize that God became man. Epiphany puts the spotlight on the truth that this human being born in Bethlehem is truly God; He is the God-man.

Jesus is the true light who enlightens every person. As the Nicene Creed clearly states, Jesus is “God of God, Light of Light, very God of very God.” Jesus Himself announced: “I am the light of the world. Whoever follows me will not walk in darkness, but will have the light of life” (John 8:12). It is with compelling reason that Epiphany is often spoken of as the Festival of Lights.

A new era
When Jesus went to the Temple at the age of 12, He made clear that He was in His Father’s House (and about His Father’s business) as God’s own Son. And the Father Himself was manifesting Jesus as His Son when Jesus amazed those who heard Him (Luke 2:41-50). A new era had begun. Now God is present among people in a new way. He is present in Jesus rather than in the Old Testament Temple. The old was passing away and the new promised day was dawning. As the New Testament reveals, God is now present among us also in the presence of Jesus in His Word, in the Holy Supper of His Body and Blood, and in all His people who are very much the Body of Christ.

The Baptism of Jesus, which we commemorate on The First Sunday after the Epiphany, brilliantly announces by the very voice of God the Father that Jesus is the Son of God and shows that He is God together with the Father and the Holy Spirit.

Luke gives us this account: “[W]hen Jesus also had been baptized and was praying, the heavens were opened, and the Holy Spirit descended on Him in bodily form, like a dove, and a voice came from heaven, “You are my beloved Son: with you I am well pleased'” (Mark 3:21-22).

God declares Jesus to be the Son of God as the Holy Spirit anoints Jesus for His Messianic mission—the mission He undertakes at His baptism.
The Wise Men did well to fall down and worship Jesus and present Him with precious gifts and so do we.

Jesus reveals His glory
By words and actions, Jesus revealed that He is God made man. At the wedding in Cana of Galilee Jesus turned water into wine for the celebration when there was no more wine. John reports that this was Jesus’ first sign. He writes, “This, the first of his signs, Jesus did at Cana in Galilee and manifested his glory” (John 2:11).

There were many other occasions when Jesus showed His deity as He lovingly ministered to the needs of people. One day in the synagogue in Capernaum Jesus met a man with a demon who tried to protect himself from Jesus because he knew that Jesus is “the Holy One of God.” But Jesus, using His divine power, overcame the demon and cast it out. Jesus cast out other demons that came out of people shouting, “You are the Son of God!”

Then, there was the day when Jesus saw to it that tired fishermen, who had caught no fish during the night, caught breaking nets full of fish during unlikely morning hours. Little wonder Peter, James, and John followed Him at His invitation.

The most splendorous and radiant manifestation of Jesus’ deity is shown to us on the last Sunday of the Epiphany Season. The event is the climax of the season. It is

The Transfiguration of Our Lord. Taking Peter, John, and James, Jesus went up on a mountain to pray. “And as He was praying, the appearance of His face was altered and His clothing became dazzling white.” Moses and Elijah of Old Testament days “appeared in glory and spoke to him of his departure which he was about to accomplish at Jerusalem.” Peter, James, and John were asleep for a while, but “when they became fully awake they saw his glory and the two men who stood with him.” Then, “a cloud came and overshadowed them” and “a voice came out of the cloud saying, “This is my Son, my Chosen One; listen to him!'”

Such a splendid facet of the diamond of Epiphany! It is one that also shows us the glory that Jesus will share with us in the world to come.

Savior of all
Epiphany vividly reveals the reason the Son of God came among us as one of us. He has come as the fulfillment of God’s promises to send a Messiah who would save all people, without any kind of exception, from sin, its condemning and life-controlling power, and to restore all kinds of people everywhere to the presence and power of God.

This salvation, which Simeon called “a light for revelation to the Gentiles and for the glory of your [God’s] people Israel,” is also demonstrated by the visit of the Wise Men to the child Jesus. These Wise Men (or Magi) were not Jews. They were Gentiles whom God led to Jesus by a brilliant star in order to manifest that His saving plan is indeed for Gentiles as well as Jews.

In the epistle for the festival day itself, St. Paul discloses the revelation that Jesus has come not only for Jews, but also for Gentiles. He says that until it was revealed to Him by God, this truth was a mystery. But God has now made known “that the Gentiles are fellow heirs, members of the same body, and partakers of the promise in Christ Jesus through the Gospel.”

Through St. Paul, God “has brought to light for everyone what is the plan of the mystery hidden for ages in God who created all things.” In words of St. Paul to Titus, it is certainly true that “the grace of God that brings salvation has appeared to all men” (Titus 2:11).

These comments remind us of other words of St. Paul about Jesus Christ. “[He] gave himself for us to redeem us from all wickedness and to purify for himself a people that are his very own, eager to do good” (Titus 2:14).

Because the Son of God was born as a human being, He has been able to suffer and die for our sins in our place And because He is God, His suffering and death are sufficient to pay in full the debt we owe to God for our sinfulness and disobedience.

His resurrection from the dead, the greatest of all epiphanies, causes His victory to shine forth in radiant splendor. Salvation is for all of us through faith in Jesus Christ, God’s own Son, and this message is the greatest splendor of Epiphany.

Lives enlightened by Epiphany
When the splendor of Epiphany has shown radiantly and brilliantly into our lives, we can never be the same. Why? Because in Holy Baptism our lives have been “epiphanized.” We are the people of light who are transformed and transfigured.

St. Paul is clear about this. We have been buried with Jesus “by baptism into death, in order that, just as Christ was raised from the dead by the glory of the Father, we too might walk in newness of life.” He concludes that we must consider ourselves “dead to sin and alive to God in Christ Jesus.”

Let us remember that Jesus has given Himself not only to redeem us from all wickedness, but also to purify for Himself a people eager to do good (Titus 2:14).

As we move through this Epiphany Season, we will become more and more enlightened about how to live “epiphanized” lives in our contemporary, sometimes dark, dreary, and dangerous world. In turn, we will be enabled by God Himself to live the “epiphanized” life. Here is a short list to consider:

1. Share the splendor of Epiphany as God did by the guiding star and worship Jesus with precious gifts;
2. Draw on your baptism for comfort, confidence, and courage;
3. Use your newness of life to care for others;
4. Let the words of your mouth and the meditation of your heart be acceptable to the Lord;
5 Live a life of love as described by St. Paul;
6. Excel in building up the Church;
7. Strive to live the “blessed” life outlined by Jesus;
8. Remember that Jesus is God’s Son and Chosen One; and
9. Listen to Him.

Bask in the splendors of Epiphany, every single brilliant facet of the season, and praise the Lord!