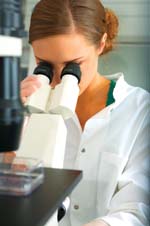 Even though there is talk about cloning humans to “replace” a dead child or to provide body parts for transplant, most people are opposed to such cloning. But there is support for cloning human embryos to obtain stem cells to treat disease. Christians acknowledge that God has given us abilities to treat and heal. However, God’s gifts can be misused.

I hope this article will help you sort through some of the confusing language about cloning so that you will be able to apply God’s Word to this issue.

Cloning: Understanding the basics
The cloning procedure is extremely technical and difficult—it took 277 tries to clone Dolly the sheep in 1996. However, the concept of how cloning is supposed to work is not difficult to understand with a little review of some basic biology.

You consisted of a single layer of cells forming a hollow sphere with a mass of cells inside the sphere. The single layer of cells on the outside eventually formed your placenta. The mass of cells inside the sphere was your stem cells. They formed your heart, liver, brain, pancreas, skin, bones, etc. Each stem cell has the potential to become any kind of cell of the body. As you traveled through the fallopian tube and implanted in your mother’s uterine lining, your cells began to differentiate and you continued to develop.

The cloning procedure
In cloning, there is no uniting of sperm and egg. The nucleus is removed from the egg cell, and the nucleus from a body (somatic) cell of the person to be cloned is transferred into the egg. This nucleus contains all 46 chromosomes. The egg is stimulated, and development begins. If this tiny human being is implanted into a womb, he or she will continue the normal process of procreation and would be born as the identical clone of the donor of the somatic cell.

Cloning is cloning
Most people are opposed to “reproductive cloning”—allowing a cloned embryo to develop full term. However, many researchers make a distinction between cloning to produce a born child and cloning to produce embryos to use as a source of stem cells for research—or “therapeutic cloning.”

But cloning is cloning. Once you transfer a somatic cell into an egg cell and stimulate it to grow, you have produced another human being. The question that remains is what to do with that human being—destroy him or her for stem cells or implant him or her into a womb. It is important for Christians to understand that “therapeutic cloning” does not prevent the formation of a human being. In fact, it dictates that a human being be destroyed.

Don’t be misled by “therapeutic” and “treating disease” and “promising medical research.” Understand that these words mean that one tiny human being is going to be killed so that his or her body parts (stem cells) can be used in an effort to help another human being.

Christians should not be dispassionate about those suffering with debilitating diseases. But, the formation of a human life for the express purpose of destroying that life cannot be acceptable to the Christian, regardless of the supposed benefit.

Why we oppose cloning
Even if stem cells obtained from cloned embryos eventually do prove to cure diseases, Christians must oppose cloning humans. Our reason is fundamental: The creation of life must be left in the hands of the Creator. In the beginning God created the first humans, and He did so in a very “hands on” way. He formed Adam from the dust of the ground. He made Eve from one of Adam’s ribs. When God told them to be fruitful and multiply, He set into motion a biological process for procreation. But He didn’t remove Himself from that process. His hands, the psalmist tells us, knit us together in our mother’s womb. God is still intimately involved in the creation of life through the process He established. God has also established a place for His procreative biological process—marriage. Procreation is to take place within the context of the one-flesh union of man and wife.

Sin, of course, has put its mark on God’s procreative process. It does not always work as it was intended. We can be thankful to God for the wisdom He gives to people who have been able to develop technologies that assist in the procreative process and overcome some of the effects of sin.

However, sin has done something else as well. “You’ll be like God knowing good and evil” (Gen. 3:5). That first temptation has been at the root of all subsequent temptations. Cloning goes way beyond assisting in procreation. Cloning removes the procreative act from the process. It changes procreation into production. It places man, not God, at the center, and man decides what is right and wrong, good and evil. Cloning assaults God as the Author of life and insults Him as the Lord of Life. Christians must oppose cloning because it is inherently wrong and contrary to the will and way of God.

Stem-cell research:
Understanding the basics
What stand should a Christian take on the issue of stem-cell research? We can answer that question relatively easily when we understand when life begins.

This is precisely why Jesus was “conceived by the Holy Spirit.” He had to pass through all stages of human development to redeem us from our sinful human nature.

Embryonic stem cells are derived from a human embryo at about five days after conception. (Refer to the diagram on the previous page.) However, a 5-day-old human being must be destroyed in order to obtain these stem cells. Christians must oppose embryonic stem-cell research (ESCR) because it violates God’s Fifth Commandment against the taking of innocent human life. The potential of future cures for human beings cannot justify the destruction of human beings. ESCR also violates the positive aspect of the Fifth Commandment that we are to help and befriend our neighbor. Since life begins at conception, that new person is our neighbor from that moment. We are to love our neighbor as ourselves. We are to speak up for those who cannot speak for themselves.

Other sources of stem cells
There is no need to destroy an embryo to obtain stem cells. Adult stem cells are found in a variety of tissues in our bodies. Umbilical cord blood is another rich source of stem cells.

Theology of the cross
No one would deny the heartache and struggle of having an incurable, chronic disease. It’s devastating for the individual and the family. It’s understandable that their strong desire for a cure can lead them to placing trust and hope in things like ESCR.

But in his explanation of the First Commandment in the Large Catechism, Martin Luther states that trusting in the one true God means expecting “nothing but good from Him, especially in distress and want.” God has shown His love for us on the cross, not in the absence of disease. The cross assures us that God can and does work through suffering to produce great good. The greatest suffering of all time—Christ suffering for the sins of the world—produced the greatest good of all time—the forgiveness of sins and the assurance of eternal life to all who believe.

Advances in biotechnology are gifts God has given to enhance and extend our lives. As with all gifts, however, we can use them in ways God did not intend. God does not intend that we destroy tiny human beings in order to help human beings. God is opening doors for research using stem cells from sources other than human embryos. These we may and should pursue for the betterment of God’s wonderful gift of life.

With such a God on our side, we don’t need to turn to the ways of this world to solve our problems. We can have faith in the will and the ways of our God, whose love is assured regardless of our circumstances.