I didn’t mean to be a missionary.

In fact, I was quite self-conscious and would have preferred to have avoided the situation completely, but God had other plans. 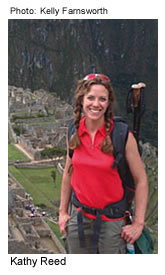 You see, I was in Peru, fulfilling a 30-year dream. I wanted to spend time in villages high in the Andes. My group had already visited Cusco, the old capital. Now we were trekking for a week on a rarely used trail to Machu Picchu.

As a surprise, our guide arranged a blessing ceremony by a local shaman. We were staying in a remote “community”: one school building, one soccer field/cow pasture, and a solitary adobe wall. People had hiked in over the mountains from miles around to enjoy the benefits of our day of community service—running a medical clinic; giving away clothing and toys to kids; providing area schools with paper, pens, and other supplies; and making adobe bricks.

The blessing began with the shaman selecting three perfect cocoa leaves and blowing prayers through them to the four directions. He then began to prepare a gift for the mountain goddess. He placed a hand-woven blanket on the grass; then he laid down a square of floral gift wrap—a natural theme to coincide with the natural mountain. Gifts were carefully arranged on the paper: cotton to represent the clouds, wool for the provision of the sheep so critical to Peruvian life, and various types of candy. The assortment of candy was necessary because the mountain spirit is female, and of course, all women love candy. Then the shaman approached each of us with a basket of cocoa leaves.

We were arranged in a semicircle. Each of us was to take three perfect leaves for our personal prayers to the spirit. When the shaman approached me, I took my three leaves though my mind was screaming that I could not participate. Even just pretending to offer prayers to a mountain spirit went against everything I believe and had been taught about my Christian faith.

Yet how could I refuse? We had been told that our entire group must participate for the most effective blessing. I would be spending the next week intimately living and trekking with my new comrades, and if I didn’t participate—well, I had visions of being blamed every time something went wrong. Even worse, the blessing included the entire community for about 20 miles around, and most of the residents were watching the ceremony with great interest. How could I offend these people I had come to help?

One by one our group members approached the shaman, extending their cocoa leaves and whispering their prayer requests. One by one the shaman prayed over them. I watched as my turn came closer. I searched frantically for a way out of the mess. Finally—inspiration! As the woman two people down from me went up for her prayers, I discreetly stepped back and moved around the semicircle to take a picture. I watched as my friend next to me took his turn, then, seamlessly, my friend on the other side followed. Success!

The Shaman finished the personal prayers. Then he wrapped the mountain spirit’s present. He carefully folded the paper just so, wrapping it with colorful cloth, to prepare a very tight bundle. He then announced that to make the blessing complete, he must bless each and every one of us. He began to go around the semicircle again, pouring a small amount of sage-infused oil on participants’ hands before carefully touching each participant’s knees, chest, back, and forehead with the package. Rats!

This time I had hope—my photo guise had worked so well before, I decided I’d try it again. Again, as my turn approached, I slipped behind the group, moved back to my original position and took a picture. Again, no reaction from anyone. Yahoo! I was home free!

As the shaman blessed the last member of our group, Jose, one of our guides, called out “Kathy! Kathy! Come and get your blessing! Kathy, don’t you want your blessing?”

I was aghast and forced myself to gently, nicely reply, “No, but thank you,” as I smiled.

“Kathy, Kathy, you need to do this so we’ll have good luck. Won’t you come and take your turn?”

Again, a gentle “no, thanks” with a smile.

I expected all sorts of fallout: Stunned disbelief from the parents, elders, and children of the local community. Teasing becoming accusation from fellow trekkers if anything went wrong over the next week. Public shunning.

None of that happened. The local community had no reaction. And instead of avoiding me, my new friends on the trek approached me. Quietly, discreetly, one by one, they found moments to ask why I didn’t participate in the blessing. They sought to understand why I felt the “harmless” and “fun” ceremony conflicted with my faith. They were curious about what I believed about God.

Each of these conversations was unique, depending on the individual’s beliefs and questions. In general, I shared that I believed in the God who created all things, both in the heavens and here on earth, and that praying to these things He created would not only be pointless, as God is the One truly in charge, but even worse, would be offensive to Him— a sin—and distract me from Him and His ways. I summarized my beliefs by stating that I am certain I will one day be with God in heaven because I believe Jesus Christ’s death on the cross is payment for everything that can separate me from God.

When several of my new friends mentioned that all the world’s religions basically teach the same thing, I explained that my understanding is that in all religions but one, the individual must act in order to save himself, and he is never sure if what he has done is enough to achieve his desired fate. Only in Christianity do we have the certainty and security of knowing our ultimate fate. This certainty lies in simply believing in what Jesus, the only Son of God, did for us. I chose my words carefully, knowing that some of my friends’ non-Christian churches applied different meanings to the terminology used in true Christian churches.

Never would I have initiated those sorts of discussions. Instead, God used my most publicly horrifying moment so that my new, non-Christian friends wanted to learn more about my faith and sought out opportunities to do so.

No, I did not plan to be a missionary on that trip. I just was doing the best I could to discreetly, respectfully handle a difficult situation. And God used it to open doors.