by Rev. Steven B. Borst 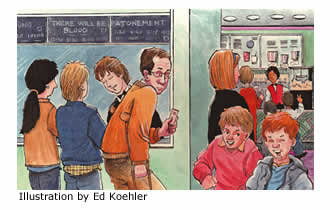 To fully understand my blunder, you must first realize two things about me. First, I am a pastor. Second, I recently had knee surgery, and I had been cooped up in my house for several weeks. That’s why, when a good friend offered to take me to a movie, I jumped (though not literally) at the opportunity. The cinema would be a good antidote for my cabin fever.

We decided to see the Golden Globe and Academy Award nominated There Will Be Blood. “It’s gotten great reviews,” we reasoned, “and it promises to be a gritty oil-field tale of a bygone California era.”

We drove to the cinema, and I hobbled to the ticket booth somewhat distracted by my crutches. Tickets in hand, we shuffl ed to our seats. This, too, took some effort, but fi nally we were set for our afternoon entertainment.

The movie began in England. “This is a bit odd,” I thought. “Had this oil baron come from across the Atlantic?”

The protagonist was a 13-year old girl, which also caused me consternation. “I wonder where this plot device is going?” I asked myself.

Twenty minutes into the tale, it was clear that the plot was never going to end up in the American West. By this time, my eyes had adjusted to the darkness, and so I looked around at the other patrons in the theater. They seemed more like Jane Austen aficionados than “gritty film” types. It was then that I realized my mistake. We were in the wrong movie.

Now here is where the first fact about who I am comes into play. As a pastor, I confused There Will Be Blood with Atonement (the name of the movie we were actually seeing). Don’t laugh! I know only an idiot would confuse these two very different movies, but in a distracted moment at the ticket booth, I had conflated the two titles. It was an honest theological mistake.

For Christians, there is no atonement without the shedding of blood. Rom. 3:21–25 tells us, “But now a righteousness from God, apart from law, has been made known, to which the Law and the Prophets testify. This righteousness from God comes through faith in Jesus Christ to all who believe. There is no difference, for all have sinned and fall short of the glory of God, and are justified freely by His grace through the redemption that came by Christ Jesus. God presented Him as a sacrifice of atonement, through faith in His blood” (NIV).

After the movie, I embarrassingly pondered my blunder and realized that all was not lost. Because of my “ministerial mistake,” I had gained a unique insight into screenwriter Christopher Hampton and director Joe Wright’s movie (which itself is based on the novel of the same name by Ian McEwan).

The insight? The nature of the atonement being attempted.

As the story unfolds, we are led to believe that Robbie Turner is the one who must seek atonement. Though falsely accused and imprisoned, his life’s ambition is to be reunited with his true love Cecilia. His driving motivation is to seek “at-one-ment” with the woman he loves.

As the story ends, however, we realize that the movie really isn’t about Robbie and Cecilia after all. It’s about overly imaginative 13-year-old Briony, who fabricates the false story of Robbie’s crime, which ultimately separates the two lovers. Five years later, as an 18-year-old nurse-in-training, Briony fully understands her mistake, and she has a chance to set things right. She contemplates going back to the authorities to retract her testimony and clear Robbie’s name.

But fear makes her impotent. Atonement means that there will be blood. True atonement involves personal confession and sacrifice. Whether it’s seeking to avoid humiliation or desiring to preserve her own good name, Briony never acts on her good intentions. She chooses silence over confession. Tragically, both Robbie and Cecilia die while still separated, never to be reunited.

Many years later, Briony finally tries to make amends. Now a best-selling author, she writes an account of the Robert-Cecilia love story. It is a fictional account, however, because the end of her novel departs from fact. In her book, the two lovers are reunited and live happily ever after. This is Briony’s attempt at atonement. Although she remained silent in life, through her novel she finally speaks out and gives Robbie and Cecilia the life they deserve.

One certainly feels compassion for Briony, whose mistake as a young teenager will haunt her all of her days. Yet, when she finally seeks to atone for her wrongdoing, it’s decades too late and amounts to nothing more than romantic sentimentality.

Jesus teaches us in the Sermon on the Mount, “If you are offering your gift at the altar and there remember that your brother has something against you, leave your gift there in front of the altar. First go and be reconciled to your brother; then come and offer your gift” (Matt. 5:23–24 NIV). As Lutherans, we have often used this Scripture passage in connection with the Lord’s Supper. Yes, the body and blood of Jesus first and foremost atones for our sins, but it also compels us to seek communion with one another.

Briony’s life, therefore, serves as an important reminder that when seeking reconciliation, there will be blood. “At-one-ment” involves personal sacrifice, and the window of opportunity to make things right is often so short that we dare not hesitate to reach out to others with humility, contrition, and grace.