Recent events involving a fundamentalist Mormon group in Texas have focused attention on what is commonly called polygamy (“multiple marriage”), or more precisely, polygyny (“multiple wives”), whereby a husband has more than one wife at the same time.

This practice is not new and is not exclusive to groups such as the Fundamentalist Church ofJesus Christ of Latter-day Saints (FLDS), whose compound,the Yearning for Zion Ranch near Eldorado, Texas, was raided by police in early April.

The practice is also allowed by the Quran and followed by some Muslims, even in this country. Those who follow this practice often appeal to the Old Testament to support their beliefs.

Today, as a result of the actions by Texas authorities, and the subsequent media coverage, some Christians are asking, “What are we to think of this?” “Why did God allow polygyny in the Old Testament?” and “How should we respond?”

A Christian response begins with God’s original, created design for marriage. Then we have the opportunity to proclaim the Gospel of Jesus Christ’s redeeming love for His bride, the Christian church. His faithful, exclusive love shapes Christian marriage, which can be an evangelical witness to the world.

Gen. 1:26–27 narrates the creation of “mankind,” consisting of “male and female,” by the triune God, who speaks in theplural, “Let us make man in our image.” Luther connected this creation to redemption: “Just as at that time God rejoiced in the counsel and work by which man was created, so today, too, He takes pleasure in restoring this work of His through His Son and our Deliverer, Christ” (Luther’s Works, American Edition, 1:68, commenting on Gen 1:27).

The image of God was the original righteousness, knowledge of God, faith, and life in conformity with God’s will. This image was lost in the fall into sin (Genesis 3). Yet, already in Gen 3:15, the Gospel promises the restoration of God’s image. The original creation serves as a pattern of the restoration that is to come, when believers will be raised to eternal life and again comprise a humanity “similar to God in life, righteousness, holiness, wisdom, etc.” (Luther’s Works, 1:65).

In Gen. 2:18–25, God called the man’s solitude “not good” in contrast with God’s verdict on the rest of creation as “very good.” To remedy Adam’s solitude, God formed from his flesh one woman—not two or more women, nor another man. In marriage, one woman is reunited with one man, and the two become one flesh. Marriage is “the closest of all relations of love.” (E. W. Hengstenberg, “Prolegomena,” 303).

Some Lutheran theologians have even wondered whether God may have created marriage at least partly for the purpose of anticipating Christ’s spiritual marriage with His church. In God’s eternal plan, Christ’s redemption and union with His church may have served as the pattern for the first marriage in creation (Franz Delitzsch, Hohelied, 186–239).

Polygamy certainly was not part of God’s original design. After the Fall it was an innovation by Lamech (Gen. 4:19), a descendant of Cain, the first fratricide (Gen. 4:8). Lamech, the first bigamist, bragged to his wives about his prowess at murder (Gen. 4:23–24). The Old Testament recognized the existence of polygyny among some of God’s chosen people.

It could be the result of a lack of faith that God would fulfill His promises (Abraham and Hagar in Genesis 16). In the case of Jacob (Genesis 29–30), it was the result of trickery and a human solution for infertility. Although it caused family conflicts, God used it to multiply His people, including the family line of the promised Messiah. However, no Old Testament passage requires it or commends it as God-pleasing. Many passages advocate monogamy as the normal and ideal form of marriage.

Jesus reaffirms God’s design in creation for marriage: One man and one woman for life (Matt. 19:1–12). St. Paul assumes this when he requires that a pastor be “the husband of one wife” (1 Tim. 3:2; Titus 1:6). The New Testament also affirms this by the way it employs the marriage motif to express God’s design in redemption. The New Testament links the relationship between the one husband and one wife in Christian marriage to the spiritual marriage of the only Savior, Jesus Christ, to His bride, the “one holy catholic and apostolic church” (Apostles’ Creed).

Already in the Old Testament God spoke of His relationship to His redeemed people as a marriage. Israel was Yahweh’s wife, married to Him by His exodus redemption, but later estranged or even divorced because of her unfaithfulness–though also with the promise of remarriage through an act of divine mercy (Is. 54:5–8; Ezek. 16:60-63; Hosea 1–3).

The New Testament portrays Jesus not yet as the Husband, but as the Bridegroom (Matt. 9:15; John 3:29) who has come to inviteall people to God’s wedding feast (Matt. 22:1–14; 25:1–13). In these wedding parables Jesus does not include a bride, since the bride consists of all who respond to His Gospel invitation to believe in Him. All baptized believers are part of His bride, the Church.

Now we await the return of our Bridegroom. The Church is not yet Christ’s wife, but His betrothed and waiting virgin bride (2 Cor. 11:2; Rev. 22:17). A tension is implicit in this motif because she is now betrothed, but individual Christians must keep watch and guard our faith and purity in Christ, lest we be excluded from the wedding (Matt. 22:11–13; 25:13). “The wedding of the Lamb” (Rev. 19:7) will take place after Christ’s second coming. At that time the “bride” will become “the wife of the Lamb” (Rev. 21:9).

Incorporated into One Body

The Sacraments of Baptism and the Lord’s Supper pertain to this spiritual marriage. St. Paul alludes to Holy Baptism when he describes how Christ has cleansed His bride “by the washing of water with the Word” (Eph. 5:26). Through Baptism into Christ we have been incorporated into our Lord’s body. We also receive His true body and blood in the Lord’s Supper, which strengthens our faith and joyful anticipation of the return of our Bridegroom.

The New Testament portrays the spiritual marriage between the Bridegroom and His bride as the pattern for Christian marriage (Eph. 5:21–33). The marriage theology of Ephesians 5 flows from the Christology and ecclesiology in Ephesians 1–4. Just as Christ is the head of the Church, which is His own body (Eph. 1:22–23; 4:15), so the husband is the head and loves his wife as his own body (5:23, 28–31). St. Paul uses “mystery” for God’s will revealed in the Gospel (Eph. 1:9) and for the mystical union of Christ and His church, to which he relates the physical union of Christian husband and wife (Eph. 5:31–32).

Polygamy (like same-sex marriage, which is also making headlines again because of a recent ruling by the California Supreme Court) is excluded by the biblical marriage motif. There is only “one body and one Spirit. . . .one Lord, one faith, one Baptism, one God and Father of all” (Eph. 4:4–6). What Jesus declared about divorce is also an accurate explanation for polygamy: God allowed it during the Old Testament era because of the hardness of the Israelites’ hearts, but it was not God’s design in creation (Matt. 19:8), nor is it God’s design in redemption. Jesus Christ is the one and only Bridegroom, and His church is the one and only bride.

Marriage is a holy estate created by God for one man and one woman, a loving, lifelong union for the benefit of spouses and the nurture of children. The redeeming love of Jesus Christ is that of a spiritual Bridegroom who has gathered all baptized believers to comprise His one virgin bride, the Church, endowed with His own holiness and purity as she awaits his return and the consummation in the new creation. The faithful, monogamous, lifelong love of spouses is a testimony to the world of the fidelity of our Bridegroom and our joyful hope for His return. 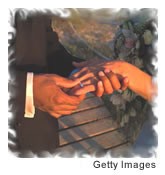 On June 24, Synod President Gerald B. Kieschnick issued the statement below expressing disagreement with the California Supreme Court’s May 15 ruling that overturned the state’s ban on same-sex marriage.

“The 4-3 ruling declared that the state Constitution protects a fundamental ‘right to marry’ that extends equally to same-sex couples,” the Los Angeles Times reported in a May 16 story.

Kieschnick’s statement was e-mailed leaders throughout the Synod and included 2004 LCMS Convention Resolution 3-05A, “To Affirm Marriage as Union of One Man and One Woman,” which Kieschnick referenced several times in his statement. The statement was also printed in the July issue of Reporter, the official newspaper of the LCMS.

The recent decision of the California Supreme Court legalizing same-sex “marriage” highlights the downward spiral of moral values that is becoming so prevalent in our culture. This most recent action contravenes not only the Judeo- Christian values that have defined the moral compass of this great nation, but also the laws of nature and the natural reproductive process.

As a Christian body in this country, the LCMS has the duty and responsibility to speak publicly in disagreement with this action of the California Supreme Court. In the present context we cannot be silent, since such silence “could be viewed as acceptance of the homosexual lifestyle.” Accordingly, we as a church body urge our leaders, members, congregations, and all Christians “to give a public witness from Scripture against the social acceptance and legal recognition of homosexual ‘marriage.’”

While this occasion calls us to declare that homosexual behavior is both unnatural and sinful (see Lev. 18:22; 20:13; Rom. 1:24–27), we also recognize that it is necessary to respond to these “sexual sins with the same love and concern as all other sins, calling for repentance and offering forgiveness in the Good News of Jesus Christ when there is repentance.”

The Gospel declares that Jesus Christ is the atoning sacrifice for the sins of the world (1 John 2:2), and that Christ, who knew no sin, was made to be our sin so that in Him we might become the righteousness of God (2 Cor. 5:21). It is the church’s proper evangelical work to proclaim the reconciliation of the sinner to God in the death of Jesus Christ (2 Cor. 5:18–19) in a spirit of compassion and humility, recognizing that all have sinned and fall short of the glory of God, and are justified freely by His grace, through the redemption that came by Christ Jesus (Rom. 3:23–24).

Dr. Gerald B. Kieschnick is president of The Lutheran Church—Missouri Synod.

1 thought on “God’s Design for Marriage”