Is the Lutheran Church short on saints? By some standards, it appears that it might be. There are other Christian denominations that seem to have at least one saint (or more) assigned to every day of the year. The Lutheran listing, as represented by the saints included in the table of “Feasts and Festivals” and the list of “Commemorations” in Lutheran Service Book, is not that extensive. “Feasts and Festivals” presents us with about two dozen names, and “Commemorations” adds fewer than a hundred more. Are these people the only genuine saints in the history of the Christian Church?

From the very first Christian centuries there has been a continuing concern that not every saint who should be would be remembered properly. Somehow his or her life and death in the faith would go unnoted. To address that concern, the Festival of All Saints was instituted. Church historians report that the Church of Antioch, one of the earliest centers of the Christian faith, held a remembrance of all holy martyrs on the first Sunday after Pentecost each year.

By the time of St. John Chrysostom, in the fifth century, the day was observed as a holiday throughout the Christian world. By the ninth century, the festival day, which originally was observed in the spring, was moved to Nov. 1, so that Christian pilgrims who traveled to Rome to celebrate together could be fed more easily at the time of the autumn harvest. Giving thanks to God for the saints of the past and thoughtfully remembering them has been part of the piety of Christian people in every century.

Remembering the “unnamed saints of the past” became even more popular during the Middle Ages. It was not by calendar accident that Martin Luther posted his 95 Theses on the door of the Castle Church in Wittenberg, Germany, on Oct. 31, 1517. He knew that one of the largest gatherings of the faithful in the entire year would be passing by that door the following day, as it had become a “holy day of obligation,” requiring church attendance by all Christians by decree of the Pope in 1484, the year after Martin was born. Luther’s choice of the eve of All Saints’ Day for the sharing of his ideas and concerns about the faith and the Church is now remembered as the beginning of the Reformation.

Luther made certain that each of the children born to him and his wife, Katherine, were named for one of the great saints of the past. His own name, Martin, had come to him directly from the saint’s day on which he had been baptized, Nov. 11, when St. Martin of Tours, a fourth-century French bishop, was remembered by the Church. His affection for the saints is reflected in a sermon he delivered in 1537, when he said: “Thus I praise and laud the true saints, people graced and gifted with an understanding of Holy Scripture and with many fine, splendid endowments of the Holy Spirit, gifts which they also use for the improvement and encouragement of Christendom.”

What about Saints Today? 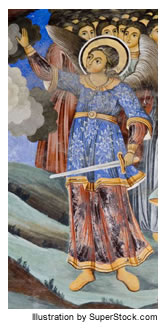 Luther was well versed in the lives of the saints. But have the Lutherans who follow in his churchly footsteps kept that same interest in, and devotion to, the saints? Certainly the names of the saints are remembered in the names of countless Lutheran congregations across the country. There are many churches named for St. Paul, St. Peter, and St. John.

There are even Lutheran parishes that commemorate the names of St. Laurence, St. Ambrose, and St. Athanasius. Yet, extensive celebrations of the lives and deeds of the saints in Lutheran congregations, with such activities as processions or chancel dramas, are not very common in 21st-century America. Are we in some way “shorting” ourselves by not remembering the saints as fully as we might?

Going back to the basics in learning about the saints may help us recover some of the faith-uplifting power that the stories of these devoted people supplied to previous generations. The Apology of the Augsburg Confession clearly states the following: “Our Confession approves honoring the saints in three ways. The first is thanksgiving. . . . The second service is the strengthening of our faith. . . . The third honor is the imitation, first of faith, then of the other virtues.”

Although the feasts, festivals, and commemorations included in Lutheran Service Book are not exhaustive, they do provide a solid start for the remembering of the saints, not only those from the centuries after Christ, but also men and women of faith included in the books of the Bible as well.

The month of November invites us to recall and thank God for St. Andrew on the 30th and to commemorate a notable variety of people of faith throughout the month, including Johannes von Staupitz (11/8), Martin Chemnitz (11/9), Martin of Tours (11/11), the Roman emperor Justinian (11/14), Elizabeth of Hungary (11/19), Clement of Rome (11/23), and, from the Old Testament, Noah (11/29). Information about these inspiring people of God can be found on the Web site of the LCMS Commission of Worship and in numerous books.

Some years ago Concordia Publishing House released the book Saints and Angels All Around, which included devotional reflections on the lives of memorable saints. In October, CPH published the Treasury of Daily Prayer, which presents daily meditations for each day of the calendar year, some of which feature readings about the saints included on the Church calendar. The book also incorporates quotations from outstanding Christian writers, many of whom are noted in the list of commemorations.

Another way to find devotional materials related to the saints is to use a Bible or hymnal concordance, such as the forthcoming volume designed to complement Lutheran Service Book.

There is no shortage of literature available today related to saints for anyone who makes the effort to find this special information in print or online. The process of “holy discovery” can be be inspiring in itself!

Saints All Around Us

The Lutheran Church is certainly not “short on saints” for, in the wider sense, we are all saints together by God’s grace through the working of the Holy Spirit. In the Apostles’ Creed we confess to our belief in “the holy Christian Church, the communion of saints.” In the classic hymn, “I Sing a Song of the Saints of God,” British lyricist Lesbia Scott says this about the saints:

They lived not only in ages past
There are hundreds of thousands still;
The world is bright with the joyous saints
Who love to do Jesus’ will.

Each generation supplies its own share of saints. Some we are privileged to know by name; others can only be remembered in a less specific way. Yet they too are important. In a recently written hymn introduced to Lutheran congregations through Lutheran Service Book, Carl P. Daw Jr. reminds us of that wider sense of commemoration through these words:

We sing for all the unsung saints,
That countless, nameless throng,
Who kept the faith and passed it on
With hope steadfast and strong. (LSB 678)

The Church has perpetuated the celebration of All Saints, not just to look backward in time, as important as that is for the edifying of God’s people, but to look to our own times as well. The All Saint’s Day section of in the Treasury of Daily Prayer features this quote from 20th-century Lutheran writer Hermann Sasse:

All the saints from the beginning of the world who have died
believing in the Redeemer, whether He was yet to come or had come in
the flesh, all members of the people of God of all times to the present
day—in this sense, all are fathers of the church. 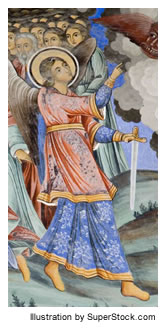 There are fathers and mothers, sisters and brothers in the faith right in your own family and right in your own congregation. The month of November, the “thankful” month, gives a great opportunity for expressing thanks to God for all of the saints who daily touch our lives—and to thank these individuals for the blessings they bring to us all year long.

Taking the time to learn about the special saints with the same name as someone you know and then sharing that information with that individual can be a faith-enriching experience. For example, sharing with a friend named Elizabeth something about the life story of Elizabeth of Hungary, a selfless, charitable queen who ruled in Germany in the 13th century, could be a blessing to both of you. Saints are people like us—or, better yet—they are us!

All Saints’ Day and the month of November that it begins invite us to celebrate the saints of times past, to share in faith with those of times present, and to rejoice in anticipation of the generations of saints yet unborn who will keep and will pass along the faith until the end of earthly time.

For more information about the illustration that accompanies this story, click here.