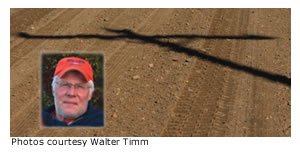 The shadow of a telephone pole. A reflection in a puddle. Airplane contrails crisscrossed in the sky. images that are part of everyday life—often not even noticed at all.

But through the lens of his digital camera, Walter “Walt” Timm sees much more. The Jefferson City, Mo., resident sees the cross of Jesus. He’s taken thousands of photographs to share that image with others—if they care to see it.

For many years, Walt’s friend, Will, didn’t want to see the cross at all. He didn’t want to hear about it, either. Walt didn’t push the issue—but neither did he let it rest.

Walt met Will in February 2003. As executive director of the Heit’s Point Lutheran Camp in Lincoln, Mo., Walt was greeting participants arriving at a weekend retreat for recovering alcoholics when Will appeared.

“It was clear he didn’t want to be there,” Walt recalls. “Even though the camp’s no-smoking policy was posted everywhere, Will walked in the door with a cigarette hanging out of his mouth.” The receptionist quickly reminded Will about the policy.

“The smile on his face was all I needed to see,” Walt remembers. “I could sense the rule being his ticket home. I reacted impulsively, spouting off something about the policy being waived for this particular weekend.”

Will reluctantly stayed for the retreat.

That summer, Will asked if he could help the camp staff by doing odd jobs such as mowing grass and repairing equipment. His skilled hands and outstanding work ethic were quickly noticed and appreciated. Often, Walt would join him. And while they worked, they talked, joked, and argued.

“Will was very intelligent, with a great sense of humor, but he always had to be right or have the last word,” Walt says. It was one reason Walt found it difficult to talk to Will about his faith.

“Trying to witness to Will was like speaking to him in a foreign language. He heard the words but none of it made any sense,” Walt says. “And if things didn’t make sense to Will, they didn’t make sense—period!”

The summer and the friendship were progressing nicely when Walt fell while horsing around withyoung campers and camp counselors. His back seriously injured, he was unable to work the rest of the summer. It could have been the end of the story.

“I went home to heal, but Will hung around camp and finished out the summer,” Walt says. “I couldn’t do much driving, but he’d travel 90 minutes to visit me. And his e-mails or phone calls always came at just the right time.”

Focusing on the Cross

Despite three surgeries and months of physical therapy, Walt’s injury forced him to retire. With his physical activities limited, he expanded his interest in photography, focusing mostly on architectural crosses on church buildings.

“Pretty soon I’d taken a picture of just about every cross in town, along every road that I normally traveled—even some of the back roads,” Walt says.

Then one day he saw something unexpected. “There were two boards coming together at a fence post, but I saw a cross,” Walt says. “From then on, no more ‘simple’ crosses. Now the pictures I wanted to take were found in the beauty of God’s creation.”

With his new focus, Walt realized how much he wanted Will to “see” the cross. He kept talking—early in their friendship Will dubbed him “Preacher Man”—and kept trying. They played a lot of cards, drank a lot of coffee, and had a lot of conversations. Often, on Wednesday nights, they’d meet at one of the local hangouts in Sedalia, Mo., halfway between their respective homes. They would drink nothing stronger than ginger ale and sing Karaoke.

“Before Christmas, I gave Will an inspirational book and a CD with some worship songs,” Walt says. “He acted like he didn’t want the stuff, but in the end he took it with him.”

In early January, Will called to talk. It was just an ordinary conversation between friends until Will, in his matter-of-fact way, asked for a favor.

“He asked me if I’d do him a service,” Walt explains. “I asked him, ‘You mean a favor, right?’ ‘No,’ Will said. ‘I mean a service.’ There was a long pause before he said anything else. By then I believed I knew what he meant: a funeral service.”

Will told Walt that he had been diagnosed with inoperable cancer. That his oncologist said he had no more than six months to live. That he wanted Walt, his closest friend, to speak at his memorial service.

“I remember wondering what you could really say in that situation if you don’t know where the person is at with his faith,” Walt observes.

A few days later, Walt’s copy of The Lutheran Witness arrived in the mail, a special issue focusing on witnessing to those who don’t know Jesus.

“There it was, right there on the cover: ‘Sharing Your Faith,’” Walt says. “That image and the articles inside motivated me to keep talking to Will. It also provided me with something for Will to read.”

When he arrived at Will’s house, magazine in hand, Walt was shocked by his friend’s appearance.

“Will looked terrible, like he had less than six days to live,” Walt recalls. After the usual small talk, Walt knew he had to ask the question he’d wanted to ask for more than three years.

“I said, ‘Will, as a Christian, I just have to know where you’re at so I know how to do what you’ve asked me to do.’ I asked him, ‘Do you believe that Jesus Christ is your personal Savior? Do you believe, Will, that He came to die just for you?’

Walt continues the story: “Well, I thought, ‘That’s not quite the answer I want to hear.’ Then, knowing Will like I do, and knowing how much he loves to argue, I said, ‘Would you refute that what I said isn’t true?’

“He said, ‘I believe in God, I believe in Jesus as my Savior, but I don’t understand it.’

“I said, ‘Will, that’s where faith comes in. That’s what I’ve been trying to tell you all along.’

“He told me, ‘Now don’t go asking me how I can explain this to you, Preacher Man. I don’t understand any of it, and I don’t know how I believe it either. I just know that now I believe it.’”

Walt notes that in his last days Will revealed a side he had not seen before. He was reunited with his son, his daughter, and his sister, and seemed to radiate peace.

“Will’s normal personality often agitated everyone around him,” Walt recalls. “He could have kept that up—lying in a hospice room would have been an excellent place to feel sorry for one’s self and be bitter because the end was near.” Instead, Walt says he saw what could only be the Holy Spirit working in Will’s life to bring about a sense of peace, a peace noticed by everyone who came in contact with him before he died.

“He said, ‘Preacher Man, I can’t believe or understand why this is happening to me, but I’m not being mad, or angry with God. Who woulda thunk it?’

“I saw that, finally, God’s grace was sufficient for Will. It was all he needed to go ‘home,’ to meet the God he had denied for most of his life.”

The light had gone on for Walt as well. He identified strongly with an article by Dr. Reed Lessing in the January Lutheran Witness that used the story of Jonah and Nineveh as a metaphor for the people and situations we normally try to avoid.

“I’ve had a lot of ‘Ninevehs’ in my life—I could see the purpose for most situations after I left, but I could never figure out why I was there to begin with,” Walt says. “But this business with Will—it’s been so clear that this was the most important ‘Nineveh’ I needed to face.

I was supposed to meet Will, be his friend, help him think about faith, and pray for him.”

At 61, Walt feels he’s finally beginning to see what God wants him to see. Not just the barbed wire on a fence, but a cross. Not just strands of wheat blowing in the wind, but a cross. Not just an ornery guy with a penchant for cigarettes and argument, but a lonely man in need of a friend and a Savior. It’s the kind of vision that changes lives forever, Walt says. 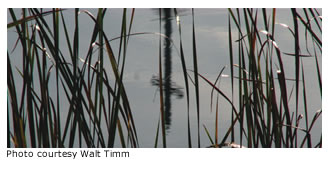 Will Collier passed away on Tuesday, Feb. 19, 2008, leaving his body to science. Walt Timm spoke at his friend’s “victory celebration” on March 8.