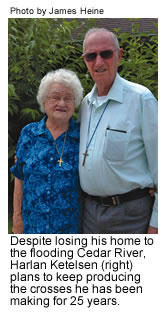 While a raging Cedar River may have forced Harlan and Marge Ketelsen to abandon the home they have lived in for 50 years, it has not dampened Ketelsen’s determination to continue producing the little walnut crosses he has been distributing for 25 years.

“Harlan’s crosses have traveled around the world,” says Rev. Jerry Doellinger, pastor of Concordia Lutheran Church in Cedar Rapids, where the Ketelsens, both 85, are members.

To date, says Ketelsen, he has made more than 220,000 crosses from wood that came from a walnut grove on land he owned for many years.

Ketelsen adds he doesn’t know how long the Lord wants him to keep making crosses, but he is pleased that they have been distributed as far afield as Russia, China, and Indonesia. “I’ve got over 70,000 crosses in Russia, and they’ve told me that a lot of them have gone to Muslims who have converted to Christianity,” Ketelsen observes.

While the Ketelsens have found a new home–“our children didn’t want us living in the mess the flood created,” Marge Ketelsen says–Harlan’s cross-making activities remain on hold pending the repair or replacement of his shop equipment.

“We had three feet of water in my garage,” Ketelsen says. “I don’t think the water hurt my band saws, but the motors and my sanders were all under water.”

While Ketelsen believes he can repair his equipment and resume his cross-making project, Doellinger isn’t so sure. “We may have to find Harlan some new equipment,” he says. “We haven’t located any so far.”