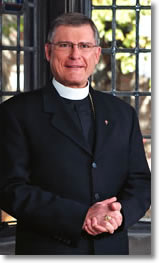 In November, voters in three states—Arizona, California, and Florida—adopted constitutional amendments to protect marriage as the union of one man and one woman. This is good news, but it’s become clear that ongoing vigilance is required if traditional marriage is to be protected and preserved for future generations.

After the November elections, many who wish to have same-sex relationships legitimized in the eyes of government showed their determination to reach their goal by any means possible. Members of The Lutheran Church—Missouri Synod and other defenders of traditional marriage must respond with compassion and love while steadfastly defending the marriage relationship as instituted by God (Gen. 2:24).

In October, the Connecticut Supreme Court ruled that same-sex couples in that state have a constitutional right to marry. Connecticut then joined Massachusetts and (briefl y) California as the only states where courts have legalized gay “marriages.” Such a judicial trend drags our American culture one step closer to systemic moral decline.

Those who value the fundamental and foundational understanding of marriage as God instituted it must be prepared to face countless legal and personal assaults with resolve, prayer, love, and thoughtful preparation. In my view, the potential for court-ordered same-sex unions illustrates the serious need for a marriage amendment in every state—so that marriage as it has been clearly understood for millennia cannot be overturned and redefi ned by a court that simply overthrows the will of the people and the governmental process, denying natural order in the process.

In its ruling, the Connecticut Supreme Court compared interracial marriage, specifi cally the rights of blacks and whites to marry, with the rights of homosexual couples to marry. This same argument was raised last month before the Iowa Supreme Court as it heard a similar case. There was a time, of course, when the races were prevented from coming together in marriage. However, to compare that historical reality to homosexual marriage today is a faulty comparison at best. Interracial marriage brings men and women together in a union that does not defy the laws of nature, while same-sex marriage goes against the biological, anatomical, physiological, and reproductive facts of life.

A primary purpose of marriage is to bring new life into the world through the procreation of children and to raise them to be productive members of society. Marriage between any beings other than one man and one woman changes entirely the meaning of marriage and renders impossible the gift that only the union of husband and wife brings to every child who is born: his or her birthright.

In the present legal and cultural context, we and other Christians cannot be silent on this matter lest we dishonor the God of Creation by our complacency.

Finally, a pastoral word is appropriate regarding this topic. There may be some reading this article who are in full agreement with protecting traditional marriage, yet fi nd themselves confl icted by their love for a family member or close friend who is living a homosexual lifestyle with a committed partner. Our Synod has clearly articulated our collective understanding of Holy Scripture that God’s love and forgiveness in Christ are real and remain constant for every person. In all matters of behavior displeasing to God, including any sexual lifestyle contrary to His Word, He calls us to repentance, desiring that we go and sin no more (John 8:11). Such is God’s love for sinners. And that includes us all.