‘It was difficult because we were there since 1887. We were very concerned. We had two buildings that might not be able to be used, that nobody would want. You don’t like to abandon something or destroy it after it’s been there for so long.’

‘It was more than we were asking for: We prayed for a place to have a sanctuary. We never thought God would bless us with this huge and beautiful church.’

The quotes above describe an intersection of two Lutheran congregations in inner-city Detroit. One reflects history: the growth of The Lutheran Church—Missouri Synod through 19th-century German immigration. Another is historic because it reflects a 21st-century pattern of immigration—and the advent of additional ethnicity and languages in the Missouri Synod.

They came together at 1450 McKinstry Street, where the church and school buildings that housed Bethlehem Lutheran Church are now home to Iglesia Luterana Pan de Vida and the ministries of LATINO (Lutheran Action Team Improving Native Outreach). Like all stories of faith, there is joy and sadness, history and the future, dying and rising.

Two years ago, both congregations had to deal with decisions about their past and their future.

In late 2007, the 11 members of Bethlehem Lutheran Church made a difficult decision: They would close the congregation and put the church and school up for sale. More than 120 years earlier, their community, about three miles southwest of downtown Detroit, teemed with German immigrant families. Gradually, ensuing generations grew up, married, and moved to the suburbs.

In the meantime, the area experienced another immigrant wave. The community came to be known as Mexicantown, a first stop for Spanish-speaking immigrants in Detroit.

The little Bethlehem congregation worshiped in a cavernous sanctuary that was home to 2,000 members in the 1920s. Their three-story school building—with four bowling alleys in the basement, six classrooms on the first floor, and a second-floor gymnasium-auditorium and kitchen—was used infrequently as membership dwindled.

“Bethlehem was one of the first churches on the west side of Detroit,” remarks Elmer Engel, who was treasurer of the small group. “We served the community well. It was a big place in the ’20s and ’30s and ’40s and ’50s. Then people moved away and got older and went to newer churches.”

One vacancy pastor would say he served a congregation with 100 percent attendance every Sunday. It was true, Engel says. “You know, everybody showed up unless they were sick in bed. We had good attendance, but very small.”

By then, everyone was commuting to Bethlehem from other parts of the metropolitan area.

“We had a number who spent their whole lives there,” Engel says about Bethlehem. “They were baptized and confirmed and married there, and this was just their church home. So when you brought up the idea that we couldn’t keep going the way we were, they reluctantly accepted it because they knew they couldn’t do much.”

About the same time, a small Spanish-speaking congregation, Iglesia Luterana Pan de Vida (Bread of Life Lutheran Church) was contemplating a purchase offer on its storefront building. The congregation was the outgrowth of mission work begun by Deaconess Teresita Rodriguez and later assisted by Rev. Gregory Lorenz. 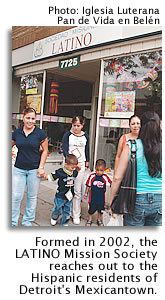 “I was the only Spanish-speaking Lutheran in the area,” Rodriguez says, remembering her call from Lutheran City Ministries in 1996 to work among the immigrant families in Mexicantown. In 1999, the Michigan District called her as missionary-at-large to Hispanic people. She offered programs such as piano and guitar lessons, ESL (English as a Second Language) instruction, and parenting classes—all ways to address family and individual needs. She intentionally used the programs to meet people and engage them in conversations about Jesus.

Yet, Rodriguez says she was not alone: “We have been able to do what we are doing here because of the mission heart of the people in the suburbs.”

Referring to volunteers from Lutheran churches in metropolitan Detroit, Rodriguez adds this: “These people, who don’t speak Spanish, have a heart for the mission, and they came here to help me with music lessons and English classes.”

Those community activities were opportunities to serve in practical ways, teach about Lutherans, and, especially, to close with devotions, the Word of God, and prayer in Spanish. That led to Bible classes and theological instruction for lay leaders. The efforts in Mexicantown gave birth to the small Spanish-speaking congregation.

Lorenz began working with the ministry in late 2000—not long after he was called as associate pastor to St. Peter Lutheran Church in nearby Macomb. Mission among Spanish-speaking people was on his heart after 10 years as an evangelistic missionary and church planter in Guatemala.

In 2002, Rodriguez, Lorenz, and others formed a mission society named LATINO (Lutheran Action Team Improving Native Outreach), with a specific focus on Hispanic people. In January 2005, LATINO called Lorenz to serve full time as executive director in a team ministry with Rodriguez as mission director. Concurrently, St. Peter also deployed Lorenz full time for this mission work. While Pan de Vida was a focus, LATINO also worked with the district and area congregations in Hispanic outreach in other parts of Michigan.

The mission operated from a storefront. With low ceilings, it was multipurpose space, hosting meetings, classes, and worship. During the week, a movable divider would slide in front of the altar and create a receptionist’s area.

“It was a space that, for Hispanics, was not really sacred space,” observes Lorenz. “It was almost a barrier to outreach and evangelism. Our members would invite people. They would walk into the storefront and look around and wonder, ‘This is church?’” 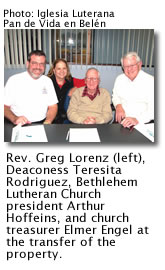 So when a doctor approached the mission about buying its building, Rodriguez and Lorenz talked and prayed—and concluded the Lord was leading them to sell.

“We knew Bethlehem was for sale, but we said there was no way we could afford it,” Lorenz recalls. However, late in 2007, he had an invitation to preach at Bethlehem and brought Pan de Vida members along, and after services they made an offer—about 30 percent of the asking price—on the buildings.

“Two days later, the president of the congregation called and said they were interested,” recalls Lorenz. “That was when we really just absolutely knew, and it was confirmed for us, that this was a God thing. There was no way we could do it on our own.”

Confirmation came in other ways, too. Unable to get permits for his project, the doctor backed out of his purchase of the storefront, and the Hispanic congregation had to look for another funding source. Pan de Vida and LATINO sought and received help from the Michigan District.

“We tried to keep it up as best we could,” Engel says about Bethlehem’s property. “So we were pleased when Pastor Lorenz’s group decided that they would be interested in taking the buildings on. We thought that if nobody wants them, we would have to tear them down; we didn’t want to leave them empty.”

Over the years, the members of Bethlehem had put money aside to keep the buildings going, Engel explains. “We had to distribute the funds we had, so we gave them back to the district, and they set up an endowment for this new group to use for the next three years.” (Bethlehem’s members were generous in other ways, too, making gifts to our two LCMS seminaries, Concordia University, Ann Arbor, LCMS World Relief, and several Detroit congregations.)

The transfer took place on April 27, 2008, with a Service of Rededication and Ministry Transition. Hymns were accompanied on the pipe organ, played by Elaine Pauli, who was baptized and confirmed at Bethlehem and taught for a time at the school. Rev. Roosevelt Gray, director of mission services for the Michigan District, preached the English sermon.

“My whole theme was about that transition, and I reminded them that it was a wonderful thing they were doing,” Gray recalls. “The Hispanic community would hear the Gospel in their own language, and this will be a lasting legacy for this community.”

In a rite based on the Apostles’ Creed, members of Bethlehem symbolically turned the congregation’s items over to members of Pan de Vida: the Bible, the altar paraments, the processional cross, the keys to the church, and the endowment.

“It was a great service,” remarks Engel. “They had a lot of people there. You know, we hadn’t had that many folks in the church in a long time.”

Then the worship continued in Spanish, with a message from Lorenz and singing accompanied by a mariachi band. The transition was followed by a reaffirmation of the ministry of Rodriguez and Lorenz.

“God has really blessed us in this first year,” Lorenz says. “He has blessed us with a beautiful mission field.” 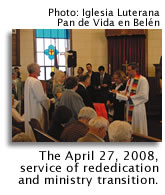 The school building has become a community center. Maybury Elementary School with 650 students (90 percent Hispanic) is across the street. Pan de Vida—which has added en Belén (at Bethlehem) to its name— has partnered with the school to offer music and art classes and after-school study programs. A Mexican folklore dance group uses the auditorium for dance rehearsals, and Sphinx, a community organization emphasizing classical music, offers music lessons and music-theory classes. Another community group, Summer in the City, provides activities for elementary students and volunteer experiences for high school students.

Pan de Vida hosted Vacation Bible School and an Epiphany party for children in the congregation and community. Volunteers teach several levels of English classes, and women from three suburban congregations teach sewing classes for both adults and children. Another group has begun a Szuma (Brazilian) dance class.

Just as Rodriguez did when she began her ministry in Mexicantown, all the activities include devotions and prayer time in Spanish.

“Everybody here knows they are a missionary in one way or another,” she says. “I have a strong belief that in our Baptism we are all called to serve God in mission. Everyone who comes through our front door is sent by God to serve or be served. We always keep that in mind.”