When you hear about a publishing company selling more than a million copies in record time, you almost expect the book to have the words Harry Potter or Twilight in its title. However, Concordia Publishing House has a best seller topping the million mark—one that has reached that publishing milestone without the over-the-top media hysteria that so often accompanies today’s publishing blockbusters.

“People need a way to give voice to their faith. There are three core books that can do that: the Bible, the hymnal, and the Catechism,” says Rev. Paul McCain, CPH publisher and executive director of editorial. “The hymnal is the book that helps put our faith in a form that we can easily remember. That is a powerful influence in a Christian’s life.”

The publication of LSB began on a strong note. Its first print run of 250,000 sold out in pre-orders, and since its debut in 2006, about 80 percent of LCMS congregations have adopted the hymnal.

“We are absolutely thrilled to celebrate the overwhelming reception that Lutheran Service Book has had in our churches,” says CPH president and CEO, Dr. Bruce G. Kintz. “At CPH, it is our mission to serve the church by providing resources for today’s ministry, and the hymnal’s success shows us that our mission is being fulfilled.”

Although most of the hymnals were purchased by congregations, a few weeks ago Rev. Gary Benedix, pastor of Hope Lutheran Church in Jackpot, Nev., made an uncommon purchase by buying a single copy of LSB.

Benedix, who recently retired after 42 years in the ministry, has “been driving 40 miles to Jackpot to serve Hope Lutheran Mission there for the past 24 years,” he says. “Hope is a mission congregation and the single congregation in Nevada in the Northwest District!”

At the time, Hope was not a part of the aforementioned 80 percent. When Benedix ordered a copy of LSB online, he planned to use the hymnal for two things: first, as a launching pad for introducing LSB to his congregation, and second, as a gift for McKenzie Heileman, his one and only confirmation student.

What came next was unexpected.

Although he didn’t know it, Benedix had indeed hit the jackpot. A small church whose attendance ranges from four to 25 on any given Sunday, Hope had not been able to adopt LSB when it was released, but Benedix didn’t let that stand in his way.

“The liturgical aspect of worship is so important to me,” he said. “The beauty of the service, especially in LSB, adds depth and spirituality to each person that uses it.”

In fact, Benedix was so interested in getting LSB for his congregation that he hoped members would purchase their own copies to use during worship and at home. But because of his single purchase, not only would McKenzie receive a hymnal, but the congregation would acquire LSB as well. Because Benedix purchased the millionth copy, CPH gave Hope 30 copies of LSB as a way of saying thank you.

“We are so excited to get started with LSB and to continue this liturgical tradition with Word and Sacrament in Jackpot,” Benedix says. “We cannot wait to begin to use these orders of worship, prayers, and hymns at our every week worship service.”

And what about McKenzie and her confirmation instruction? How will she use that milestone copy of LSB?

“I’ll expect her to use it at home to read through the devotional services, the responsive prayer, and the chief parts,” Benedix says. “It’s difficult to get kids to memorize, but her memory work will be the prayers in the hymnal, which are marvelous.”

“If you only use the hymnal on Sunday, you will miss all the little things in there that are so important,” Reske says. “Many things often go overlooked.”

In order to help LCMS members realize what they might have overlooked the last four years, CPH has introduced its “Hymnal in Every Home” campaign, which McCain hopes will show people just how the hymnal can be used at home.

“It gives great continuity between Sunday morning and home life, because it is basically your one-stop-shop. There are suggested daily Bible readings, hymns, prayers, Psalms, and more,” McCain says. “Why only worship the Lord on Sunday? His Word is our sustenance. Can you survive by eating only one day a week? Probably. But God’s buffet is open 24/7, and He invites us to enjoy richly.”

As a way to promote the purchase of hymnals for every home, CPH has reduced LSB’s prices significantly. It now offers the Pew Edition for only $20 and the Gift Edition for $30.

“From the beginning, this has been your hymnal,” Reske says, “and we want to make sure you have every opportunity to get your hands on it.”

of LCMS congregations adopted The Lutheran Hymnal after it was introduced. Around 60 percent adopted Lutheran Worship. Eighty percent are currently utilizing Lutheran Service Book, and nearly the same percentage of congregations in Lutheran Church—Canada are using it as well. 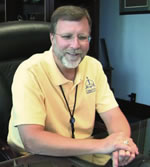 To watch Dr. Bruce G. Kintz, president and CEO of Concordia Publishing House, make the phone call to Rev. Gary Benedix, check out www.cph.org/hymnal. There, you’ll also find more information on how you can order your own hymnal at a reduced rate, hymnal tips, and videos and pod-casts celebrating the use of Lutheran Service Book.