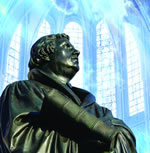 People around the world are beginning to get ready to celebrate! To celebrate what? The 500th anniversary of Luther’s posting of 95 theses on indulgences, even though many of them do not know what the theses were or what purposes indulgences served.

Whether they know much about Luther or not, many—within Lutheran churches, within other Christian churches, and outside the church completely—do know that Luther’s theses launched a reform movement. At the same time, he set in motion a cultural revolution.

In addition to refocusing the entire understanding of how Christianity functions as a religion, Luther inaugurated the first mass media event in history. He did so quite unawares. For a small circle of friends, he prepared his theses—academic proposals for debate—on indulgences, which were grants from temporal punishment from the pope after guilt before God had been absolved. Luther only wanted to explore the practice of selling these indulgences. Pope Leo X had commissioned their sale in Germany to aid Archbishop Albrecht of Mainz in paying off his debts—incurred in attaining his third high office in the church—and to support the building of Saint Peter’s Basilica in Rome.

Printers saw a market for such theses, however, much broader than Luther’s little circle of conversation partners. He was touching a raw nerve in a populace in the midst of a crisis of pastoral care. As a teacher of the Bible and an Augustinian monk, Luther burned with concern for the peace the indulgence system robbed from those who should be trusting in Christ and hearkening to His Word. The printers used Luther’s bait for debate and Johann Gutenberg’s relatively new medium to carry out an innovation in how ideas could be spread to a wide public across German-speaking lands and beyond.

That is something worth celebrating. Lutherans have celebrated Oct. 31 to remember that Luther inaugurated a revolution in the way in which western Christians perceived their faith. He had grown up with a ritual-based religion that gave the human creature ways of performing sacred works to please the Creator. He defined the Christian faith as a perception of reality based on the Creator’s longing to converse and commune with His human creatures. Luther centered his life, his trust, on God come in human flesh as Jesus Christ to restore sinners to that conversation and community by dying and rising.

Other Christians have celebrated that as well, sometimes through different lenses than Lutherans use. People outside the Church have found in Luther—with good grounding and sometimes not so good grounding—the symbol of a new way of using language and communicating, or a herald of human freedom and human rights, but also the initiator of error, political abuse of power, or racist cruelty.

In the sixteenth century, some Lutherans did stop to remember the Wittenberg Reformer, more often on his birthday and death day than on Oct. 31. On the 100th anniversary of the posting of the 95 Theses, Calvinists took the lead in celebrating Luther’s bold move. Threatening war clouds hung over Germany in 1555 as Roman Catholic officials maneuvered to reverse the tolerance granted to adherents of the Augsburg Confession by the Religious Peace of Augsburg. Lutheran princes, for the most part, exerted their best efforts to find compromise with the dedicated Roman Catholic Habsburg emperors. Calvinist princes, especially Frederick V of the Palatinate, took the lead in actively preparing for what he regarded as inevitable conflict. Rallying support across the Protestant landscape by celebrating the beginning of the Reformation seemed appropriate, politically as well as piously, at the moment. Lutherans slowly joined the planning.

Lutherans and other Christians did observe subsequent centennials when a so-called 17 year came around. In the nineteenth century, Klaus Harms—a professor in Kiel, Germany—used the occasion to issue 95 new theses, calling for a return to Reformation faith in the face of the rationalism of the Enlightenment. At the same time, the Calvinist king of Prussia, Frederick William III, used the event to initiate efforts to bring the Lutheran majority of his lands together in a union with his Calvinist fellow believers. In 1917, the Western world was at war; Germany and all things German stood in discredit in much of Europe and North America.

Luther took further buffeting in the following years because some associated his anti-Jewish remarks with National Socialist anti-Semitism. As unfortunate as those remarks were—The Lutheran Church—Missouri Synod repudiated them in convention in 1983—the association of his religiously and exegetically based criticism with the blood-and soil-related racism that arose in the nineteenth and early twentieth-century is anachronistic and irresponsible.

What will happen in 2017? Critics are already sharpening their knives. A self-designated Anabaptist announces on the Internet, “Martin Luther was not a great reformer like [sic!] the history books teach, but he was a fraud” and “deranged.” Rumors circulate that Roman Catholic critics will dredge up again a rather recent fabrication of a murder charge against Luther, which he avoided by fleeing into the monastery. In fact, Luther’s sixteenth-century opponents pioneered analysis of his life. The first biography of the Wittenberg Reformer flowed from the pen of his foe, Johannes Cochlaeus. In 1549, he published his Commentaries on the Deeds and Writings of Martin Luther, labeling Luther an “enraged hornet,” a “triple-jawed Cerberus,” and a “disgraced, infamous, and damned heretic.” Cochlaeus invented some stories that cannot be documented elsewhere . . . but not a murder.

Luther scholar Christopher Boyd Brown of the Boston University School of Theology points out that Luther did indeed say, “By the singular plan of God I became a monk, so that they would not capture me . . . because the entire [Augustinian] Order took care of me” (Table Talk, D. Martin Luthers Werke [Weimar 1912], 1:134), in reference to his protection in the church-political maneuvering following 1517. The papal party wanted to burn him at the stake, and his Augustinian superiors and brothers shielded him. The murder charge cannot be documented from reliable historical sources.

Against such allegations, what should Lutherans do as they prepare for 2017? One answer may be, “Not much.” Luther has survived Johannes Cochlaeus and countless other detractors and misinterpreters of good will. He remained in 2000, according to Life magazine, the third most important person of the past millennium. He will survive as a voice of Christ’s Gospel in the twenty-first century as well.

Nonetheless, Lutherans in North America should prepare, individually and in their congregations, for a celebration that serves the Gospel. Serving or glorifying Luther is no proper goal. He wished to fade into the woodwork so that the biblical message of new life in Christ could be broadcast. Proper preparation for celebrating the posting of the Ninety-five Theses should begin with individual reading and discussion to inform ourselves of just what it is that has made Luther a special person in western history, especially the history of the Church.

A Host of resources

Between 1958 and 1986, CPH and Fortress Press issued 54 volumes of Luther’s writings in translation. Currently, CPH is translating 12 more volumes under the editorship of Professor Brown. In addition, studies of aspects of Luther’s thought and life can enrich our understanding of what he taught and what his insights into Scripture mean for twenty-first-century people in our own circumstances and environments.

Congregations should, at the same time, place key resources for learning more about Luther and how his proclamation of the Gospel may be translated into our world in their libraries and urge members to read and digest them. To that end, congregational discussion groups will be of great help. Such groups can profit not only from printed materials but various other resources, including the several films presenting Luther’s life, produced during the past 60 years. Electronic materials also can encourage our deepening understanding of our own heritage and why it should be shared with other Christians and those outside the faith at the beginning of the twenty-first century.

Despite the fact that Luther’s world differs in many significant ways from ours—the computer has replaced the printing press; democratic forms of government the monarchy; modern capitalistic practices the partly feudal, partly capitalistic forms of economic exchange Luther experienced—our contemporaries face their own sin and other forms of evil around them. God continues to put His Church to work in bringing the life-giving message of forgiveness and salvation in the Crucified and Risen One to those around us. Luther is not the point and will not be in 2017, but his insights in the Word of life in Scripture can improve our own witness and sharpen our own skills at delivering life and salvation to those around us.

About the Author: Dr. Robert Kolb (kolbr@csl.edu) is missions professor emeritus of systematic theology at Concordia Seminary, St. Louis. Along with Dr. Timothy J. Wengert, he is the editor of the 2000 translation of the Book of Concord published by Fortress Press.