Regardless of whether rural or small-town communities are growing or declining in population, there is usually an increase in the number of unchurched or uncommitted people, observes Rev. Russell Sommerfeld, president of the Synod’s Nebraska District. 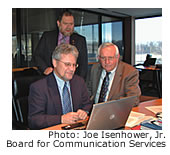 “First of all, the challenge is connecting with many of these people,” he says.

While younger residents may move to larger cities, other families move into small communities where often they are not related to anyone. Frequently, both husband and wife commute to jobs in larger communities, so congregations have to engage parents on evenings and weekends, Sommerfeld says.

Because of net outward migration, some congregations will find themselves in multiple-parish arrangements. “It calls for a willingness on the part of laity and pastoral staff to assist one another for that to happen,” Sommerfeld says.

Sommerfeld also believes there may be more ministries in the future where men may hold a job or farm while they serve as pastors. He adds that the new Specific Ministry Pastor Program will prepare men who desire to serve as pastors in their cultural or community settings. He also forecasts the possibility of more “circuit riders” who serve five or six different sites, with laity assisting at those locations.

“There are times when a new pastor will come to a small congregation, and people will say, ‘You probably won’t stay here very long,’ because they expect him to move to a larger town,” Sommerfeld says. “The answer from some pastors is ‘There’s a great ministry here. I want to stay.’ This is a reassuring message for rural and small-town churches.”

Sommerfeld counsels pastors to circulate in their small-town communities. He cites three qualities that make for good rural ministry: (1) being well-versed in biblical doctrine and having the ability to express it; (2) a love of being among people; and (3) longevity. “The longer a man is in a rural area, the more opportunity he has,” Sommerfeld observes. “You make contacts that come to fruition six, seven, or eight years later.”

A Center for Rural and Small-Town Ministry could provide pastors and laity with resources and instruction for such needs as outreach, structuring for ministry, or relating to their communities. The topic was explored in greater detail during a late March meeting involving more heartland district presidents.

“And do you know whom we will learn from?” Sommerfeld asks. “It will be from the pastors and people who are in the rural and small-town fields.”

“Our churches have wonderful opportunities to connect with these folks, help them make their transition, and speak with them of Jesus as the one Savior,” Sommerfeld says. “It’s a great thing for our state to have new people coming in, and it gives us the challenging opportunity to think about how we are going to minister to and alongside them.”